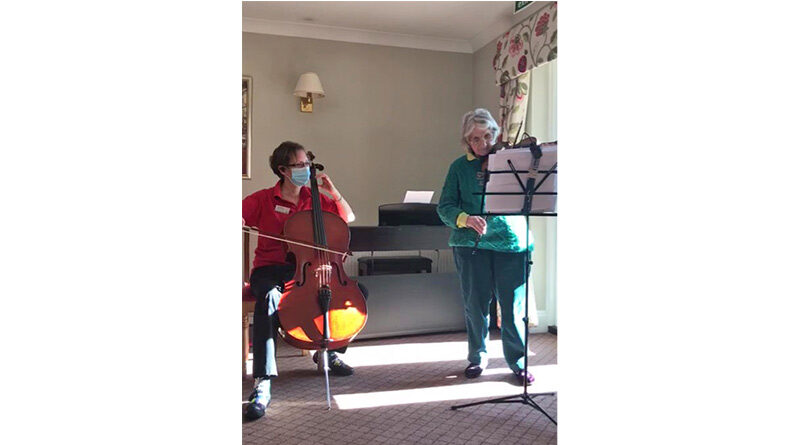 Residents at Colten Care homes across the south have been ‘Zooming’ in on creative companionship to keep spirits up during lockdown.

A host of online experiences featuring music, songs, art and poetry have brought smiles all round and even found new audiences for residents’ creativity.

Violinist Sylvia Stokes, who lives at Whitecliffe House in Blandford, Dorset, saw her solo version of Amazing Grace highlighted at the celebration launch of Together with Music, a national campaign to build links between care homes, schools, day centres and playgroups.

Footage of Sylvia playing was shown in a launch video along with a rendition of the Simon and Garfunkel hit Cecilia performed by residents at Colten’s Kingfishers home in New Milton, Hampshire.

More than 500 Together with Music members watched the performances in a webinar along with a panel of distinguished guests including Professor Martin Green, Chief Executive of Care England, and Baroness Diana Barran, Minister for Civil Society.

Other Colten homes participating in Together with Music include Linden House in Lymington, Avon Cliff in Bournemouth and Newstone House in Sturminster Newton.

Separately, three homes have been involved in a six-week University of Winchester arts project focusing on creative collaboration across the generations.

As well as Kingfishers, residents at Abbotts Barton in Winchester and Woodpeckers in Brockenhurst took part.

Via Zoom, they were invited to offer creative responses to prompts about subjects including gardens, nature, fairy tales and literature.

The residents’ ideas, presented in poetry, song, drawings and paintings, were then shared with Winchester schoolchildren who added their own artistic interpretations through activities such as drawing and model-making.

“Our residents readily engaged with the children they met on Zoom. Everyone experienced feelings of inclusiveness and socialisation by coming together online in the midst of lockdown.”

In a note of thanks to the University of Winchester project leads, Amelia Pearce and Rosie Oliver, Woodpeckers residents wrote: “We have really enjoyed your company over the past few weeks and hope we can see you again one day.”

Ideas from the project are now being rolled out to Colten’s dedicated dementia homes, including Linden House and the Winchester home St Catherines View.

Residents at several homes enjoyed learning Makaton signs as they sang and signed the Vera Lynn song We’ll Meet Again which was also featured on the Together with Music launch video.

A compilation film is available to watch on Colten’s YouTube channel www.youtube.com/coltencare.