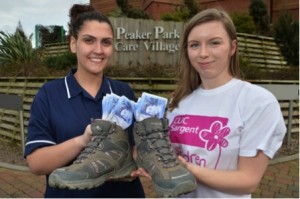 A fundraising challenge launched to pay tribute to a young man who sadly lost his battle with cancer has been kick-started by PrimeLife’s Peaker Park care home in Market Harborough.

Laura Brown, of Market Harborough, Leicestershire, is attempting to scale the heights of Kilimanjaro this autumn in memory of Andrew Brown, with funds raised going to CLIC Sargent, which supports children and young people with cancer.

PrimeLife, which runs Market Harborough’s Peaker Park, the care home where Andrew was looked after during the last six weeks of his life has donated £250.

Andrew was diagnosed with a rare and aggressive type of brain tumour called ganglioglioma in February 2013 and died in September 2014 aged just 26.

Laura said: “Andrew was shy, quiet and lovely and he was unassuming. He never wanted to make a fuss.

“The reason I am doing this is to take something positive out of what happened. The charity was very close to Andrew’s heart, they paid for him to go to the British GP at Silverstone and the care home were really good as well.”

The 23-year-old has started training for the challenge to hike up Mount Kilimanjaro, which at 5,895 metres above sea level, is the tallest mountain in Africa and the highest free-standing mountain in the world. She will be flying out on September 24.

As well as caring for older people, Peaker Parkalso offers palliative care to people aged over 18.

Laura added: “We can’t really say enough about the care he got at Peaker Park, they were excellent. When we had to leave him at night we didn’t worry because the nurses were so good.”

Nurse Nadia Jacinto, who cared for Andrew, said: “We made Andrew feel as settled as possible including steps like having an Xbox in his room. He was a wonderful man and we’re glad to be able to help Laura with her fundraising.”

In addition to personal donations, Laura is also appealing for businesses to have collection pots. To contact Laura, email lbrown91@live.co.uk. To donate, visit: www.justgiving.com/laurabrown14.