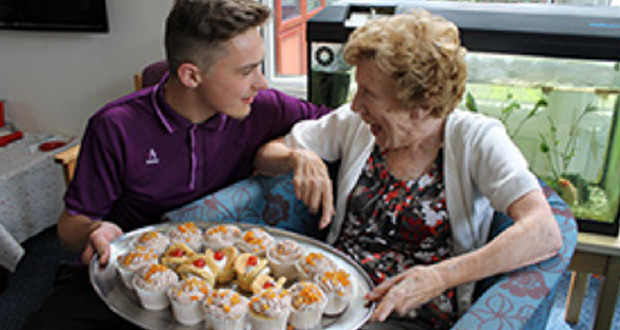 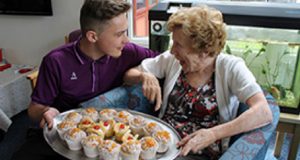 A care assistant from an Anchor care home in Woking is leading a campaign to encourage young men in Surrey to consider a career in care.

Having left college at 17, Jarred Stansfield, from Maybury, flitted between different jobs for two years before finding the job he says has helped him find direction in life – a carer at Anchor’s Heathside care home in Coley Avenue.

Jarred, now aged 20, has made such a difference to the lives of the older residents in the six months he’s been a carer that he has been chosen to spearhead the campaign in Surrey to address the chronic shortage of carers across the sector.

Anchor, which runs Heathside, commissioned a survey which found that by 2025 there will be a shortfall of one million carers across the country needed to look after Britain’s ageing population.

Jarred’s campaign, which also covers care homes in East Horsley, Staines and Thames Ditton, follows the General Election during which social care funding became one of the major battlegrounds.

Jarred said: “My other jobs had no meaning to them and I wasn’t helping anyone. Care is completely different. Unlike other jobs, I don’t dread going into work.

“The pay is better than the other jobs I’ve done and although there are easier jobs, the level of satisfaction I get every day makes up for the challenges you sometimes face.

“And as there’s lots of overtime and flexible working hours, which would be good for any university students balancing paid work with studying, it means I have a good social life, too.

“Many young people think care is a woman’s job but that couldn’t be further from the truth. As people are living longer, more men are going into care so many of them prefer to be looked after by a male carer.

“Society used to think nurses were just women and that has changed. I hope this campaign will open young men’s eyes to the great opportunities care has as a career.”

He said: “I didn’t know much about dementia and I was worried about how I could help someone with this condition but the training has helped me understand it and how it affects people in different ways. The training has given me the confidence to support residents with dementia so they have a good quality of life.

“In fact, an example of how I’ve made a difference to an older person’s life concerns a resident with advanced dementia who can’t communicate that well but has still retained her sense of humour. Her family told my manager I was the only carer she has ever bonded with me because I spend a lot of time talking and laughing with her even though she can’t speak.”

Resident Olive Bradburn, 87, said: “Jarred is so helpful, polite and always has a smile on his face. If I go outside he comes with me to keep me company. The staff at Heathside are friendly and always do their best to help you with whatever you want, and most importantly they look after me. I’ve really enjoyed today. It’s great to have a singer singing to us as we had our lunch.”