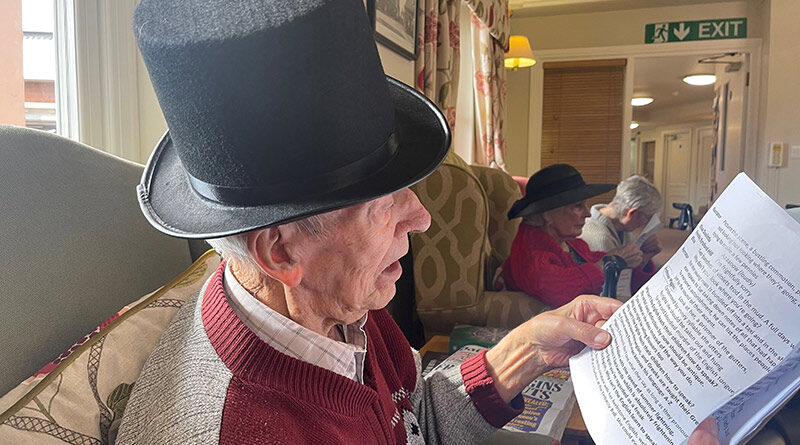 Creative residents at a Dorset care home have taken the chance to tread the boards in a mini production of the famous musical My Fair Lady.

After weeks of rehearsals, six performers dressed up in Edwardian-style hats and wowed the audience at Colten Care’s Whitecliffe House in Blandford, with fellow residents, visiting families and staff all praising the show.

The actors sang and spoke their lines from prepared booklets accompanied on piano by professional musician Caroline Pugh.

A graduate of the prestigious Guildhall School of Music and Drama, Caroline used to work at Whitecliffe House and was only too happy to help out once again.

It was Caroline’s suggestion to stage My Fair Lady after the residents had fun performing the Dickens musical Oliver! earlier this year and expressed a wish to try another challenge.

At the My Fair Lady rehearsals, Caroline helped the performers prepare their voices and, on the day, held a warm-up exercise for everyone to hum the tunes and remind themselves of their lines.

Then it was showtime, with Ronald Burnham and Maureen Smith playing Professor Higgins and Eliza Doolittle respectively.

Peter, who played Eliza’s father Alfred Doolittle and helped narrate the show, said: “We thoroughly enjoyed the afternoon. It was a great singalong.”

Among the best known songs in the musical is ‘I’m Getting Married in the Morning’ which prompted much foot-tapping by the audience.

Becky Wyeth, Companion, said:
“It was lovely to see the fun and laughter all round. The actors clearly had a great time showing off their theatrical and singing talents and the audience thoroughly enjoyed watching it all happen.

“We are so grateful to Caroline who came back to support us with this performance. We really do value her help and musicality. Even though she works independently, she still visits us regularly, sharing her love of music and her amazing talents with our residents.”

Based on George Bernard Shaw’s 1913 play Pygmalion, My Fair Lady is a love story and one of the 20th century’s most famous musicals.

The plot revolves around Cockney flower girl Eliza who takes speech lessons from phonetician Professor Henry Higgins so that she may pass as a lady.

Among its many celebrated lines are when Eliza enunciates: ‘The rine in spine sties minley in the pline’, meaning ‘The rain in Spain stays mainly in the plain’, to which Henry replies: ‘By George, she’s got it!’.

The stage version, starring Julie Andrews and Rex Harrison, was a huge hit on Broadway and in the West End.

The Oscar-winning film version, starring Audrey Hepburn as Eliza, was released in 1964.