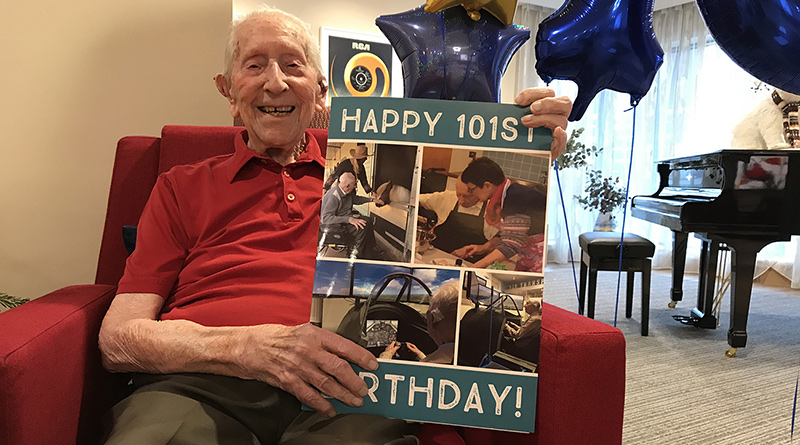 An Army veteran who says it was ‘pure luck’ that he survived the Second World War has celebrated his 101st birthday.

Geoff Smith spent the day with family, friends and other residents at Royal Star & Garter in High Wycombe on Friday 20 December.

He was one of the first residents to move into the Home, which provides loving, compassionate care to veterans and their partners living with disability or dementia, when it opened in April 2019.

Balloons marking the special occasion decorated the Home, while staff and residents sang Happy Birthday to Geoff and presented him with personalised birthday cards.

He said: “The balloons are great. I knew the staff would make something of a fuss to celebrate, but this is far more enjoyable than I anticipated.”

Geoff joined the war effort in 1940, at the age of 21, signing up to the Army and serving in the Royal Corps of Signals. He trained local troops in India before moving to Burma. During this period Geoff, who rose to the rank of sergeant, lost close friends in the fight against enemy forces.

Recalling one such incident, he told Royal Star & Garter: “We lived in tents, and I usually slept in a tent with the other sergeants. But I also had my own 40-pound tent. One night I was in my 40-pounder and a Japanese aircraft dropped bombs across our site. One of them hit the other tent, and all my fellow sergeants were killed that night. I was the only survivor simply because on that night I thought I’ll sleep in my own 40-pounder.”

He left Burma in 1945, spending the next few months in occupied Germany, before his demob in 1946. Geoff went on to enjoy a career in the Immigration Service, working at London Airport well before it became Heathrow, retiring in 1979 and settling down in Kent.

Geoff likes activities including music and movement, and physiotherapy sessions at Royal Star & Garter. He recently also enjoyed a sit-down meal at McDonald’s after telling staff he wanted to try out fast food restaurants. He is now planning visits to Burger King and KFC with staff!