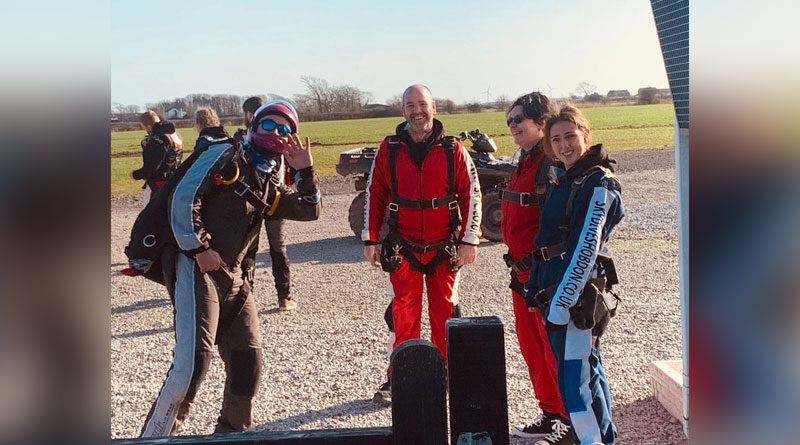 A group of Macclesfield carers have taken to the skies for a daredevil jump in the name of a Jubilee party for the residents of an Upton Priory care village and their families.

Helen Marsden, Liv Fallero and Chris Jones, braved a 15,000ft skydive to raise funds for not-for-profit dementia specialist, Belong Macclesfield, to host their own garden party for the Queen’s platinum celebrations, next month.

The volunteers: a support manager, lead senior support worker, and maintenance facilitator, respectively, personally funded their trip to the country’s highest skydive, where it took just 60 seconds to fall the 2.8 miles from the sky back down to Lancashire countryside where the jump took place – a feat which would take around up to an hour to complete by walking on land.

Thanks to the £1161.81 raised from sponsorship donations, Belong Macclesfield residents will be able to welcome their family and friends for Jubilee celebrations in the village’s dementia friendly garden. Amongst the plans include singers, a silhouette artist and plenty of bunting, tea and cake.

Caroline Ray, general manager at Belong Macclesfield, has praised the team’s efforts. She said:
“We’re ever so grateful for Helen, Liv and Chris. The money they’ve raised will help to put on what will be a wonderful bank holiday, with everyone sharing in the fun commemorating the Queen’s Platinum Jubilee.

“Many of our customers are already expressing their memories of past Jubilees and even the Coronation – this one will be the event of a lifetime!”

In addition to the festivities, Belong has been selected to feature in Her Majesty The Queen: The Official Platinum Jubilee Pageant Commemorative Album which recognises exceptional contribution to UK society and culture over the past seven decades. Since the opening of its inaugural village in Macclesfield 15 years ago, Belong has been at the forefront of driving standards of care and pioneering the ‘village living’ concept for older people and those living with dementia.