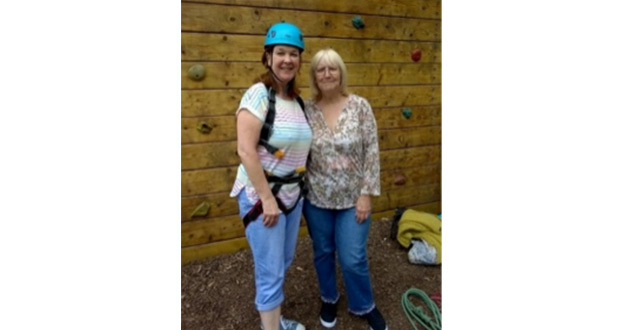 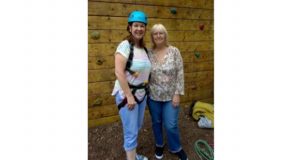 An administrator at a care home in Bognor Regis has tackled a 100m-long zip wire to raise money for therapeutic ‘companion pets’ for the residents.

Jackie Warren, who works at Elizabeth House in Bognor Regis, “zipped” down the 100m-long wire – at a height of 11 metres – on Friday 11th May at Lodge Hill Centre in Watersfield, near Pulborough. Jackie’s aim was to raise £250 in order to purchase an additional two robotic cats for the home.

Jackie said: “Elizabeth House was kindly donated a robotic cat a few weeks ago, and it is clear how much the residents benefit from it being around. The cat looks and feels realistic, purrs, meows and move when touched.”

“I have had the pleasure of seeing the residents interacting with the cat and how they bring comfort and inspire memories from when they had pets in the past. I heard about the zip-wire challenge and thought it would be a great way of raising enough money to add to our litter – I must admit, I had a few sleepless nights leading up to the challenge as I’m not good with heights”.

Jackie was joined in the daring task by local dignitaries, including: the Mayor of Bognor Regis, Councillor Phil Woodall and his consort, Steve Hearne, alongside Chicester’s Mayor and Mayoress, Councillors Peter and Margaret Evans, Councillor Jacky Pendleton as Chair of Arun District Council, the Mayor of Arundel, Councillor Angela Standing and Bognor Regis’ Town Crier, Jane Smith – all of whom were raising funds for various other good causes.

Following the challenge, Jackie said: “I was really out of my comfort zone, as I really dislike heights and speed, and nearly didn’t do it – but I am glad I did! A number of people have said I can cross it off my bucket list, but it was never on my bucket list to begin with…”

Home manager at the Shaw healthcare run care home, Marian Drake, commented: “We are all very proud of Jackie for doing this challenge on behalf of the residents at Elizabeth House, especially as we know how nervous she was, but on the day, she was fantastic.

“Jackie’s fundraising efforts are important to us as companion pets are proven to have a positive impact on the wellbeing of those living with dementia, and we have seen first-hand how this can work in practice.”