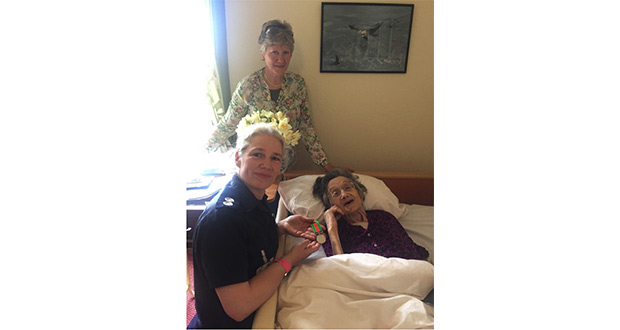 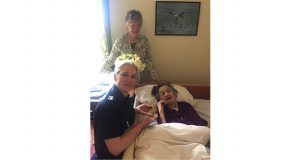 BLITZ fire service veteran Doreen Maltz has received a medal for her efforts in London during the Second World War.

The 95-year-old resident of Burton Closes Hall Care Home, in Bakewell, was presented with the Defence Medal by the town’s first and only female fire officer.

Alyson Hill was joined by Bob Curry, Bakewell Fire Station area manager for first response, for a special ceremony at the care home, on Haddon Road.

Bob said: “It has been a real honour to present Doreen with her Defence Medal for her dedication to the fire service.”

Hazel Jones, home manager at Burton Closes Hall Care Home, said: “As a home manager, it has been an honour to be able to help fulfil Doreen’s wish of receiving this medal.”

Doreen signed up to the fire service when the War broke out in 1939 – she was 19 years old.

After just six weeks of training, she was stationed at the London Red Cross Street fire station.

A gruelling schedule saw Doreen working 48 hours on, 24 off, during the height of the War, as bombs rained down on the city during the Blitz.

Speaking to The Fire Fighters Charity magazine Shout!, Doreen recalled: “Some nights were dreadful. Firemen were out all night; half of London was alight. Some ended up at St Barts Hospital; one or two unfortunately died.

“Life went on – you just had to accept the air raid sirens going on. One day incendiary bombs landed on the roof – it was my day off, but one of the other fire women went up to the roof and put out the fires with stirrup pumps. She was given the OBE after the war.”

Doreen also spent over a year at Saxmundham Fire Station in Suffolk after the US had taken over an airfield nearby.

After the War ended in 1945, Doreen moved back home and worked as a bus conductor, then a machinist in her father’s workshop.

She also joined the Red Cross, volunteering for hospital work, worked on the cheese counter at Sainsburys and took over a drapery shop in North London until she retired.

She moved to Burton Closes Hall Care Home in 2016, when she spoke to the home manager at the time, Carl JD Fisher, about her service during the Second World War.

Carl, now a Bakewell Town Councillor, carried out research on Doreen’s behalf and discovered the Defence Medal, awarded for both non-operational military and certain types of civilian service between September 1939 and May 1945.