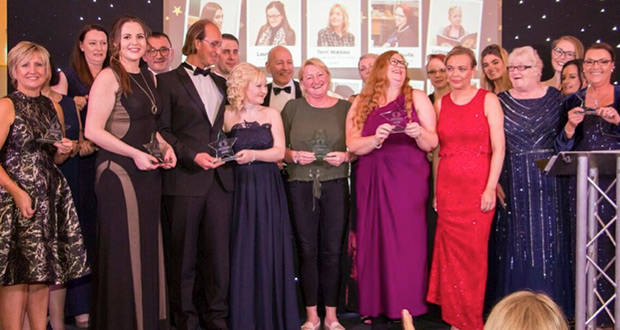 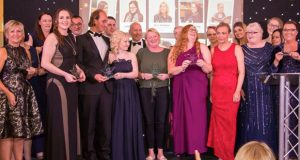 David Bates and Graham Lomer, founders of the Healthcare Homes Group, and recognised care industry figureheads, were presented with Outstanding Achievement awards at the inaugural Healthcare Homes Group Star Awards. The awards took place at a gala reception at Hanbury Manor in Hertfordshire at the end of April.

Philip George, Chairman of Healthcare Homes Group delivered a speech to both David and Graham at the awards, to thank them for their dedicated commitment to delivering a quality service:

“My working relationship and friendship with David and Graham began in 1990, where I provided legal counsel to their former organisation.   I soon came to realise I was working with and for very special people, who believe passionately in what they do, who care deeply for the wellbeing for the residents in their care and also for the staff that work for their company.  They have a great sense of humour and working as part of their team was a fun experience and not a chore in any sense.

“David and Graham richly deserve the Special Achievement Award.  They have built the group from a shell company with no homes, no assets or no homecare branches into the thriving, vibrant organisation it is today. In doing this, they have never been willing to compromise on quality, which has to be maintained at the highest possible level at all times, while maintaining their sense of fun and doing their utmost to ensure that the best interests of their staff and the people in their care are maintained at all times.  I’m delighted that the company has chosen to mark the enormous contribution that David and Graham have made – not only to the business, but the care industry as a whole.

The Star awards were launched to recognise residential carers, domiciliary carers and staff that go above and beyond, as part of their working roles at the Healthcare Homes Group, which is made up of 37 residential and nursing homes, plus 16 homecare branches.   Finalists were nominated by managers across the group.  The full winner’s rostrum was announced as follows: