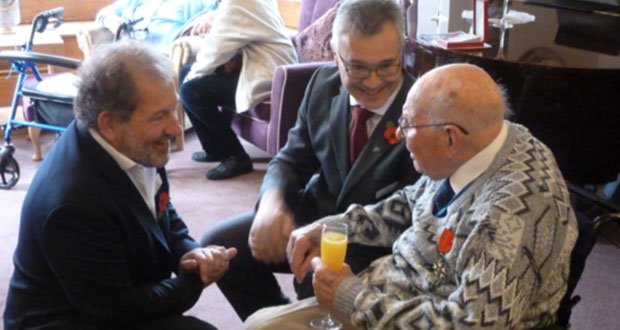 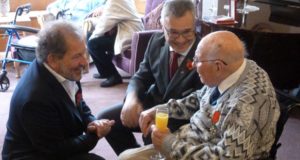 Today, Barchester care homes, hospitals and offices across the country held a two minute silence to remember those who fought and fell to protect our freedom.

The commemorations will continue throughout the weekend in a number of poignant and creative ways as Barchester staff and residents seek to show their respect for those who have fought for our country, and for many, to remember family and friends who were lost in World War One and World War Two.

Woodhorn Park Care Home in Ashington is one of many care homes doing something a little bit different to mark Armistice Day. They are holding a special Remembrance Ceremony, during which the Mayor of Ashington will unveil an art installation inspired by the ceramic poppies that surrounded the Tower of London in 2014.

Their ‘poppy waterfall’ covers a pit wheel, which is a permanent feature in their award-winning garden. This magnificent tribute to the sacrifices of others looks even more impressive at night when it lights up and has been admired by residents, staff and others in the community.

One resident at Woodhorn Park said: “It is very important that we keep the memories of those who fought alive and that we also think about those involved in conflicts around the world today.”

The French government has been awarding the Légion d’Honneur to D-Day veterans from many different countries for several years, as a way of honouring and thanking those who fought and risked their lives to secure France’s liberation during the World War 2.

Barchester’s Chief Executive Dr Pete Calveley and CFO Mark Hazelwood were present to observe the presentation and took the opportunity to speak to Roy about his services during the war and to show their admiration.

Dr Pete Calveley said: “Today is a hugely significant day for the whole nation as we mark the end of the First World War and remember those who sacrificed their own lives for our freedom and those who continue to make this sacrifice today.

“This week I was humbled to meet Roy Onslow at Reigate Beaumont Care Home, who fought during World War 2. Speaking about those years with Roy threw into light just how much we owe those who helped defend our country and I was moved to see him receive a much-deserved Legion d’Honneur, which was officially presented to him by Honorary French Consul, Captain Francois Jean.

“There are many people like Roy living in Barchester homes who today will not only be paying their respects to those who fought for them, but will also be remembering loved ones they have lost – friends, partners, siblings, parents and grandparents.

“I’m glad to see that our staff have been working hard to host a wide range of Remembrance events and to support people to pay their respects in whatever way they wish.”