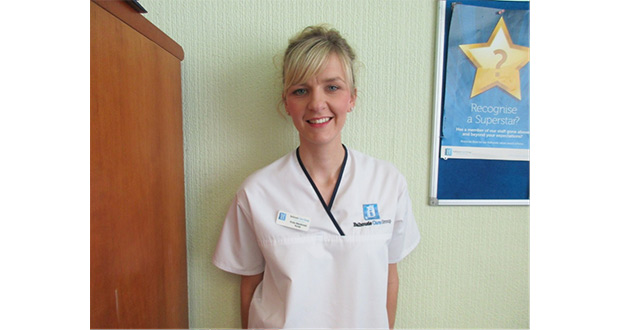 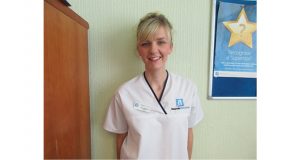 A nurse from Balhousie Wheatlands care home has been nominated for a mentoring award by the University of Stirling for her outstanding work with nursing students in the final stages of training.

Kirsty Smith, a staff nurse at the Bonnybridge-based care home, has been shortlisted for an Exceptional Mentoring Award by the university after she was nominated for the accolade by the students she mentored during placements with the care home.

Working closely with the university in partnership with NHS Forth Valley, Kirsty has mentored a number of nursing students at various stages in their training both when she worked at Forth Valley Royal Hospital and since she joined Balhousie Wheatlands in early 2016.

Wheatlands welcomed its first third year student earlier this year for their final ‘sign off’ placement before qualifying which focuses on the more managerial elements of nursing. Kirsty mentored the student and, at the end of the 15-week placement, signed them off as a fully-fledged nurse.

Kirsty said: “Being a mentor is a big responsibility – the students are literally stepping into my shoes. It’s a steep learning curve for them and I’m there to offer guidance, observe and supervise their work. With final year students, I’m helping them put into practice what they have learned about leadership, managing their time and being in charge of a care team as a staff nurse.

“Care homes like Wheatlands offer a very good environment for final year students to learn in, so I’m delighted to have been able to continue to mentor students since joining the team here. I’m thrilled to be nominated for this award as well – especially since I’ve been nominated by the people I’ve been mentoring.”

Grace Sloan, Home Manager at Balhousie Wheatlands, added: “We’re all really proud of Kirsty. Her nomination for this award is very well deserved. It’s a privilege for us to have staff nurses in our team who are experienced enough to ‘sign off’ nursing students in the final stages of their training ahead of qualifying and we look forward to continuing to support Kirsty as she mentors more students as they join the nursing profession.”

Kirsty will attend a special award ceremony in the Learning Centre at Forth Valley Royal Hospital on Friday, November 30 to find out if she has won the mentoring award.