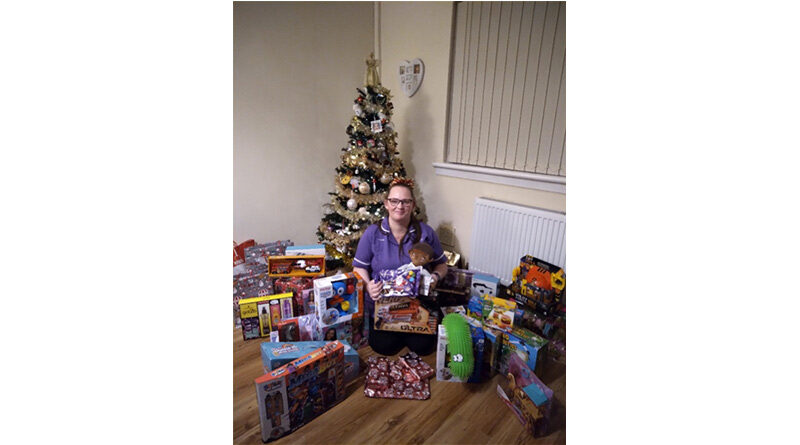 STAFF from a Kilmarnock-based care home are organising a ‘Toy Drive’ which will see more than 40 local children get Christmas presents they would otherwise not have.

Argyll House, which is part of Mansfield Care, are donating presents to East Ayrshire Women’s Aid, who will distribute them to children who suffer from domestic abuse.

There are more than 200 children in the East Ayrshire area alone being supported by East Ayrshire Women’s Aid this Christmas. The charity aims to offer support and refuge for women, children and young people who have suffered directly or from the knock-on impact of domestic abuse.

The idea came from the home’s team leader, Elaine Martin, who proposed the staff swap their Secret Santa giving for the charitable donation.

Elaine of Argyll House, said: “We don’t need a Secret Santa, but every child deserves a Christmas.

“I thought it was a good idea to get everyone involved in a good cause this year and to ditch the Secret Santa in order to really benefit children around East Ayrshire.

“East Ayrshire Women’s Aid do incredible work – we have a very giving set of staff at Argyll House so it wasn’t hard to convince our 40-strong team to get involved and contribute to spread some festive cheer to those who may not get any presents at all.

“We’ve already seen a great mix of presents from bath bombs to kids toys and pyjamas. We’re so pleased to have made a little difference this Christmas with the help of East Ayrshire Women’s Aid.”

Staff at the Ayrshire care home have picked tags from a bucket that has age and gender information on them and have purchased presents for the child described on their Toy Drive tag.

Team Leader at East Ayrshire Women’s Aid, Caroline McKenzie said: “It’s amazing how generous people are. We’re so grateful to the staff at Argyll House for their incredibly kind donation, it really will go a long way.

“By putting their money, time and effort into helping those suffering, they are going to make Christmas so much better for carers, parents and children suffering from domestic abuse.

“Special occasions like Christmas often hold bad memories for children who suffer from domestic abuse as tensions often rise around this time of the year. East Ayrshire Women’s Aid are trying to change the perception of what Christmas means for these children.

“We want to create new memories for the children who don’t usually get the best Christmas.”

Children up to 16-years-old in and around the East Ayrshire community will benefit from the care home’s kindness this year and will have presents to open on Christmas Day.

Elaine of Argyll House added: “All going well, this is something we are going to try to do every year instead of Secret Santa. It’s brought us closer together as a care home knowing that we’re improving so many children’s experience of the festive period.”