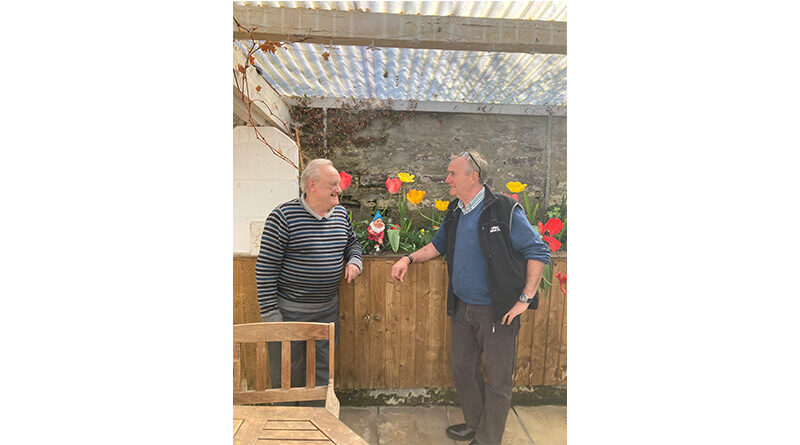 Residents at a local supported living facility are getting ready to celebrate National Gardening Week (April 27 – May 3) in their new-look garden.

Gardening group Grow for Talgarth approached the home last autumn to ask if any of the residents or staff would like to be involved in a project to transform their outdoor space.

Les Jones, who has been a resident at the home since 2018, was especially keen to get involved and wanted to grow more flowers and vegetables at the home.

Every Wednesday, the residents of Ashburnham House and members of Grow for Talgarth came together to clear the outdoor space and make plans for the garden.

COVID-19 restrictions put their meetings on hold, but the enthusiasm to complete the new outdoor space never wavered, and the staff, with the residents, worked to upcycle a bath into a small fishery pond.

The resident have also grown and harvested their own vegetables – including onions, potatoes, cabbage and carrots – and enjoyed making and eating their own soup with these ingredients.

Patrick Sharman, supported living manager of the Shaw healthcare-operated home, said: “We had very limited green space at Ashburnham, but with the help of Grow for Talgarth, and the hard work of a number of our colleagues – including Joanna Latham and Kate Boxhall – we have transformed our outdoor space.

“The area went from dreary and overgrown to an attractive space with pollinating flowers, vegetables and a small pond.

“Les is just one resident at Ashburnham who has seen great reward from being a part of the Grow for Talgarth group – he claims it has changed his life.”

A new £500 project, named after the town river and called ‘Enig-matic Edibles’, has been launched by The Wye and Usk Foundation and will be supported by the staff and residents at Ashburnham House. It aims to provide opportunities for therapeutic horticulture within the local community – including planting and growing vegetables and fruit to benefit biodiversity.

The Ashburnham garden was included among other gardens across Talgarth in the 2020 national competition Cultivation Street, in the Community Garden section. The town won first prize in Wales and third in the UK.

They have entered the 2021 award, as well as the RHS Wales in Bloom competition, where the Ashburnham gardens will be judged by an official award representative.

Mr Sharman adds: “It’s been fantastic to see some of the residents who have extreme difficulties in motivation and communication work together to achieve the same goal, and even better to see the hard work being recognised through multiple national awards.”