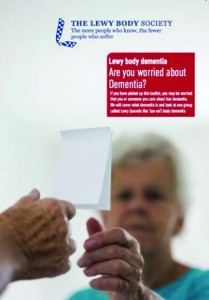 The Lewy Body Society is launching two new information leaflets to improve recognition of Lewy body dementia, the second most common progressive dementia, which affects over 130,000 people in the UK.

The widespread public misconception that ‘dementia = Alzheimer’s = memory loss’ delays help for people with Lewy body dementia symptoms: visual hallucinations, extreme fluctuations in consciousness (from alert to confused or sleepy), stiff and slow movement, acting out very vivid dreams and a potentially fatal sensitivity to drugs given for hallucinations (antipsychotics).

From its helpline and facebook page, the charity hears of cases in which diagnosis took years because of a failure to recognise the symptoms in primary care. The two new leaflets entitled ‘Are you worried about dementia?’ and ‘Referral for a diagnosis’ will help people concerned that they, or someone they know, may have dementia by explaining symptoms to be aware of and recommending that they seek expert opinion. Early diagnosis is essential for effective management of the disease.

By describing the fluctuating nature of the condition, the charity aims to help families and the care staff working with them to provide better support and make the most of the lucid periods experienced by people with a Lewy body dementia.

Founder and Chair of the Trustees of the Lewy Body Society, Ashley Bayston, comments, “Dementia as a public health issue today is in a similar position as cancer was 25 years ago. People have been reluctant to speak openly about it and there is stigma arising from fear and ignorance. Like cancer, there are many different types of the illness. With a population bulge of aging baby boomers, more people now face the reality of possible dementia.”

The Lewy Body Society welcomes initiatives to reduce the stigma of dementia and increase levels of diagnosis – but calls for accuracy in dementia awareness campaigns and diagnosis because ‘dementia isn’t always memory and isn’t only memory’.