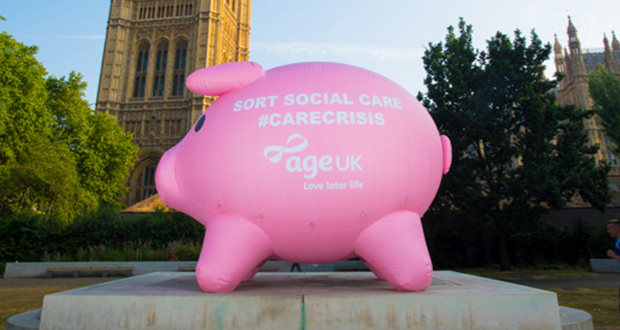 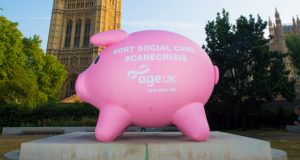 With the latest data suggesting 1.4m older people go without the care and support they need and that the social care crisis is costing the NHS over £500 per minute, this summer ‘Penny the Inflatable Piggy Bank’ will be taking to the road across England to highlight the urgent need for more funding for social care.

She will be making her way around the country including visits to party conferences in Brighton, Liverpool and Manchester, and many other places too, where she will be hosted by local Age UKs, among others.

Caroline Abrahams, Charity Director at Age UK said:
“Age UK’s new analysis shows that the numbers of older people who don’t get the care and support they need have soared to a record high of 1.4 million. Meanwhile, delayed discharges due to a lack of social care are costing the NHS a staggering £500 every minute. These numbers show the Government’s current approach of feeding the NHS at the same time as starving social care is simply a recipe for wasting money, and one that produces a lot of suffering and distress for many older people in need.

“We are really pleased the Government is giving more money to the NHS but much of it will be frittered away unless and until they also plug the yawning funding gap in social care. The Government is expected to publish proposals about the future of social care by Christmas, but however good or bad their ideas turn out to be they won’t make any practical difference to older people for several years to come. That’s why, for the sake of our older population, the Chancellor must announce a major three year funding deal to keep social care going as part of his Autumn Budget.”

Follow Penny the piggy bank around the country by using the hashtag #WhereisPenny?