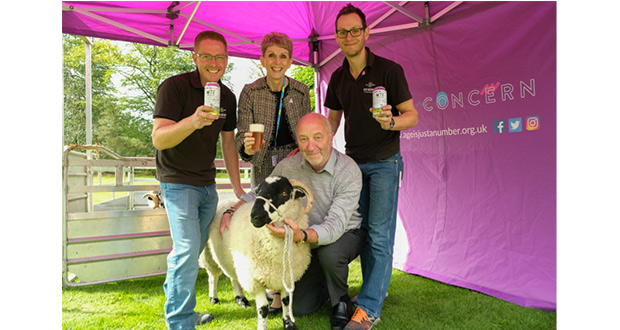 Businesses throughout the north west gathered to celebrate the action-packed launch of Age Concern’s latest campaign which tackles loneliness and isolation in Lancashire.

The “What the Flock” (#wtf) campaign was unveiled at the Preston Marriott Hotel with the support of an award winning cartoonist, a specially crafted beer and a real flock of sheep.

The campaign introduces ‘Lonk the Lonely Sheep’ who is sad and lonely until a group of socially conscious sheep on a neighbouring hillside realise that Lonk needs help and collectively agree they ‘give a flock’ and spring in to action!

Chief Executive, Suzanne Carr said “Never-before has Age Concern faced such an unprecedented demand from vulnerable adults across Lancashire. Estimates suggest that 35,000 older people are chronically lonely and isolated. Nobody should face these problems alone.

The #wtf campaign is set to make a real difference to lives in Lancashire by raising vital funds to combat loneliness and isolation.”

Award-winning cartoonist Tony Husband, who has worked for many of the world’s leading publications including, The Times and Private Eye, created the ‘What the Flock’ illustrations and told of his own family’s experience of dementia.

“Dementia carers often find themselves increasingly isolated which is why I am so pleased to be able to support the “What the Flock” campaign.”

Tony’s book, “Take Care Son”, the moving, illustrated story of his father, his journey through dementia and how it slowly took him away from his family, has touched many. Since then he has become fully involved in raising awareness of the illness.

Beer Brothers Brewery, Preston’s largest micro-brewery introduced its special IPA brew on the day. Joint Founder Phil Leyland said: “As my father lives with dementia the charity is one that is very personal to me and my family, so we were keen to support it. The new beer is the perfect answer.”

A small flock of Lonk sheep also made a special guest appearance. Steve Morris, from Goodshaw Farm, and the Lonk Sheep Breeders’ Association, said “We were delighted to help Age Concern in any way we could and especially pleased that the inspiration for the campaign is based on the Lonk sheep.”

The sheep on the day were a small selection from the 150 strong flock at the Farm and is part of a breed which is over 200 years old and reared by farmers in the Lancashire and Yorkshire Pennines.

The Charity has set up a crowd funding page where anyone can make a donation via https://www.ageisjustanumber.org.uk/wtflancs