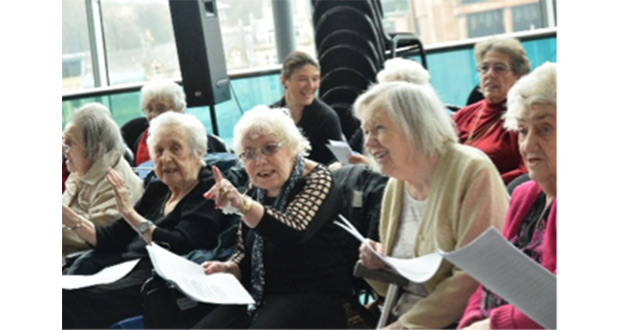 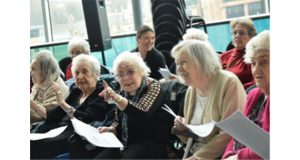 A POP-UP choir made up of residents and staff from North East care homes has performed to the public for the first time.

Since forming last October the Gateshead Care Home Choir only had one group rehearsal ahead of their debut performance at concert venue Sage Gateshead.

Instead, the 75 care workers and older people living with dementia learnt well-known and original songs each fortnight with professional musicians Nicky Rushton and Liz Corney.  Among the songs performed by the choir were original compositions Salty Air and Tick Tock, created by older people living in a care home.

Musician Nicky Rushton said: “There was a real element of anticipation and excitement with the choir having had only one full rehearsal. However, at that first meeting it was instantly clear their voices would gel as a choir. Having worked with residents and staff in small groups it really was an inspiring moment to hear so many strangers sing in harmony.”

The choir has been developed by creative ageing charity Equal Arts, which aims to improve older people’s wellbeing and support care staff to bring creativity into their work with those living with dementia.

Alice Thwaite, the charity’s co-director said “There is now strong evidence that music is a powerful stimulus for reaffirming personal identity and supporting people with dementia to have a better quality of life.  Musical emotion

and musical memory can survive long after other forms of memory and cognitive function have disappeared.

“People living in 12 Gateshead care settings have been learning different harmonies to the same songs guided by Nicky and Liz. Brought together their sound is incredibly inspiring and an outstanding example of what can be harnessed through creativity.

“The feedback from all those involved has been extremely positive. The Care Home Choir highlights what can be achieved when you support staff to develop singing in care settings under the guidance of professional musicians to raise the quality. The choir has also shown that it is possible for people with dementia to learn new songs.”

Equal Arts was commissioned by the Tyne and Wear Care Alliance to create the choir after funding from Newcastle/Gateshead Clinical Commissioning Group to support care staff training.

Anne Laidler, activities coordinator at Lindisfarne Care Home in Birtley, said: “I feel so proud to be involved with the choir. The sense of achievement, happiness and the improvement in the residents’ well-being has been wonderful to see. The amount of work and commitment from Nicky with the group has been fantastic, she’s an inspiration.”

Elizabeth Brown, general manager of Appletree care home said: “It’s been a real treat hearing residents’ performing at the home. Our Appletree singers love learning the new songs and we’re really excited to be supporting the whole group at the performance.”

The choir is open to all care settings within Gateshead and hopes to perform at various locations throughout 2018. Care settings wanting to register an interest in joining the choir can email information@equalarts.org.uk