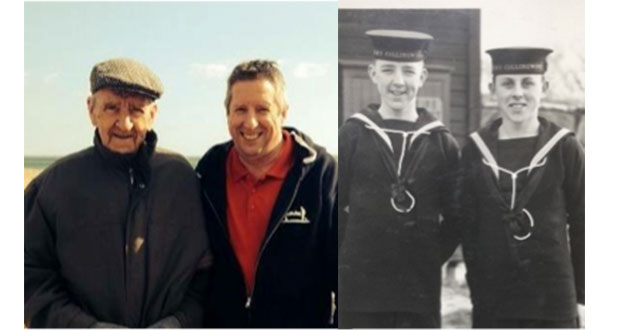 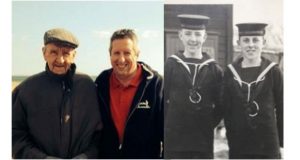 To help raise awareness for this week’s Dementia week Steve Hawson describes the effect that his father’s diagnosis had on his family.

“We noticed a change four years ago,” says Steve, 54. “Subtle things like when he received birthday cards he’d place them upside down on the mantelpiece. He’d also pretend to have read them when he hadn’t and he’d attempt to read an upside down newspaper.

“One day my mum, Maureen, was waiting at the bus stop with him and decided to pop into the bank for a minute, leaving dad at the bus stop. When she returned he’d disappeared. It turned out he’d just got on the bus – without her or a ticket.”

In his younger years Richard, known as Ricky, was a member of the Royal Navy. He joined in 1954 but was discharged on medical grounds twelve years later following a head injury in a jeep accident. For the rest of his working life Ricky was in management at BevanFunnell, Newhaven, specialising in reproduction furniture – a job he loved.

Ricky also loved socialising; he was chairman of the darts team and pool league and could add up darts scores in his head in seconds.

Ricky was diagnosed with Alzheimer’s in 2013, and for the first two years he and Maureen were able to carry on life pretty much as normal. Then the situation started to deteriorate, but Maureen was determined to try to cope on her own, largely shielding the problems from Steve and his elder brother and sister.

“I got a phone call one night from mum, asking me to come round to try and stop Dad from leaving the house,” said Steve. “Dad had got up in the middle of the night and was trying to go outside in the cold and rain in his boxer shorts – and this wasn’t the first time.”

“Mum had been trying to deal with all this on her own, playing down how bad the situation had become,” said Steve. “We discovered that mum hadn’t really slept for two weeks and had been sitting up with dad to make sure he didn’t leave the house.”

After this incident Ricky was taken to hospital, and then placed in a care home in Eastbourne. Maureen was travelling from Newhaven to the care home every other day on the bus. Steve could see the strain this was causing and got in touch with social services to see if his dad could be moved closer to home, but was told there weren’t any places available.

Steve said: “I’m a paramedic so I know which are the good care homes in the area.” Steve called Clifden House to see if it had a space. Luckily, one had become free that very day and Ricky was able to move to Clifden House Dementia Care Centre as a permanent resident.

“Mum does feel guilty about dad being in a home, despite the fact that my siblings and I have tried to tell her not to feel this way.

“Mum always spoilt dad and did everything for him. I think she didn’t want to believe it was happening. She wanted to keep him at home for as long as possible.

“Mum understands though that she can’t deal with dad at home safely anymore. The risk of him hurting himself is too high. She takes comfort in knowing that he’s now safe and professionally cared for.

“Dad doesn’t always recognise us,” said Steve, who visits once a week. “Sometimes he harks back to his navy days and asks how many boats we’ve had to take to get to him.”

“He was a really good dad,” says Steve. “He was also a very intelligent man. It’s sad that he’s ended up at the mercy of this cruel disease.”

“However I’ve learnt that although it’s difficult, you’ve got to be really positive. Remember the good times and the person they were. What’s happening now isn’t him; it’s the disease.”