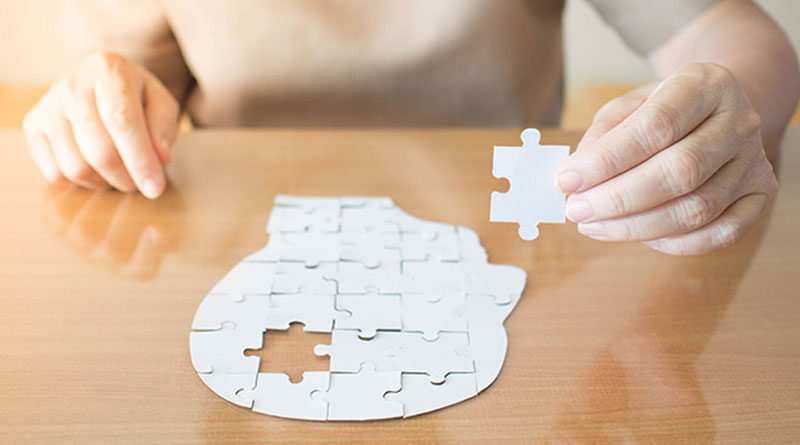 A survey, conducted as part of Dementia Action Week has revealed evidence showing that 91% of people affected by dementia saw clear benefits to getting a diagnosis, with many living with dementia wishing they had received a diagnosis earlier.

Aiming to understand the barriers and benefits of getting a diagnosis, the Alzheimer’s Society carried out a survey of 1019 people affected by dementia, and also interviewed 320 people who suspected they or someone close to them had symptoms of dementia but had not been diagnosed.

The clear message from people living with dementia is that it is better to know.

The survey found that more than 9 in 10 people surveyed saw at least one benefit in getting a diagnosis, on average mentioning 2.5 benefits.

The most frequently cited benefits were: 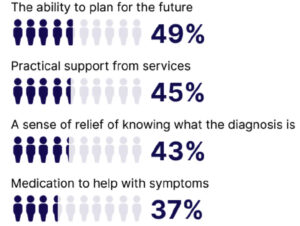 The survey also explored the barriers to getting a diagnosis and found 1 in 4 people had waited two years after experiencing symptoms before seeking a diagnosis.

60% of people who took the survey wished they had received their diagnosis earlier.

The key reasons for putting off diagnosis were: 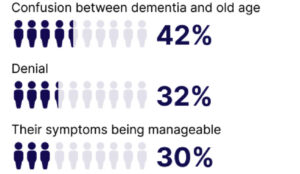 The research drove home how important timely diagnosis is, as many people who had ignored their symptoms and put off going to their GP had ended up reaching a crisis point, such as hospitalisation, before they sought a diagnosis.

Tens of thousands of people are currently living without a diagnosis and the pandemic has caused a sustained drop in dementia diagnoses for the first time ever, with rates falling to a five-year low. We estimate, due to the backlog caused by the pandemic, that there are over 30,000 people living without the dementia diagnosis they would otherwise have received, which would unlock vital support and care.

The Alzheimer’s Society is tackling barriers through an awareness raising campaign – It’s not called getting old, it’s called getting ill – this Dementia Action Week and beyond, driving home the benefits of getting a timely diagnosis, which, crucially, unlocks the door to the treatments and support which can have so much more impact if accessed in the earlier stages of dementia.

They are are highlighting that memory loss is not a normal part of ageing and are launching resources, informed by advice from leading clinicians, to arm people with all the information they need when speaking with their GP. This includes online support and advice and a new symptoms checklist which can be printed and taken to the doctor to help both patients and clinicians have an easier diagnosis experience.