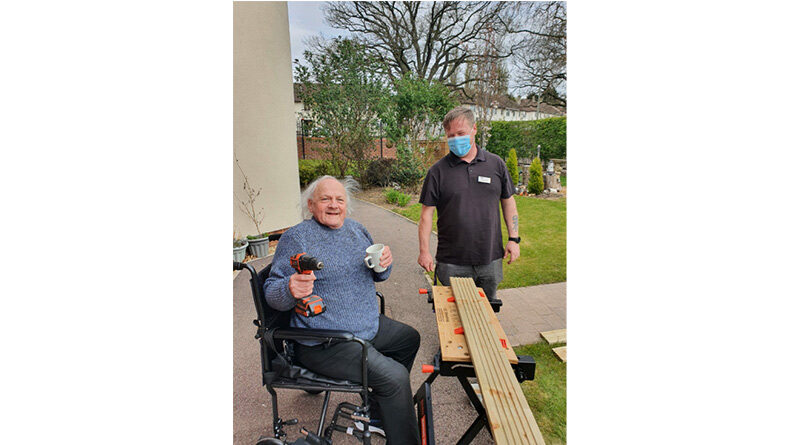 John was born and raised in Bannockburn, Scotland and worked as a Carpenter since 1964​. John was initially interested in Carpentry as always felt he was good with his hands and knew he would be able to create steady and precise markings, he also loved the idea of being able to make something from nothing. Throughout the years, John loved making his own furniture and was never short on requests from his friends and family to create bespoke pieces.

John is not long retired however, his toolbox is always close to hand and John enjoys helping out and finding odd jobs to occupy himself, claiming he feels the most purpose and sense of achievement when he is working.

Knowing this, Beaumont Hall caretaker, Gordon Bayley, enlisted John’s  help to create an outdoor seating area for residents to use through the summer months/  John sprung to action, with lots of ideas for the project.

The two tradesmen set to work for the 2 weeklong project enjoying the camaraderie as they worked. John said, ‘I am so pleased that Gordon asked me to join in with this project. I always like to get involved with things around Beaumont Hall and this was right up my street. I felt like every night I would go to bed proud of myself for a job well done and now I get to reap the benefits and share a refreshing glass of beer with my friends!’.

Caretaker , Gordon Bayley, welcomed the helping hands, he said, ‘Initially when John began helping me I joked he was my apprentice. However, it soon became clear who was in charge! It has been brilliant working alongside John and picking up some tips of the trade. It was nice to have his input on the new seating area and furniture and I think he made some great executive decisions on the overall design finish’