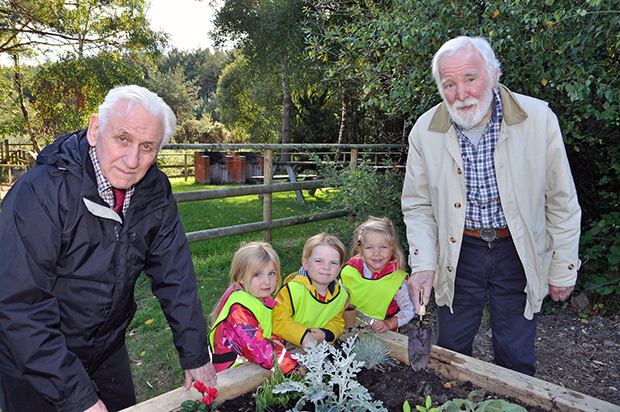 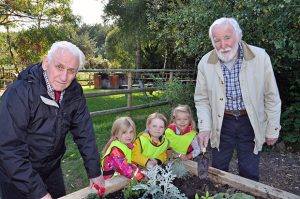 The residents from Colten Care specialist dementia home Fernhill, enjoyed potting bulbs with the children and rangers in the park’s education centre, before taking a sensory, memory walk, where they planted their bulbs in a garden area along the way.

Avon Heath runs regular sensory, memory walks, welcoming everyone, including people with dementia and their carers. 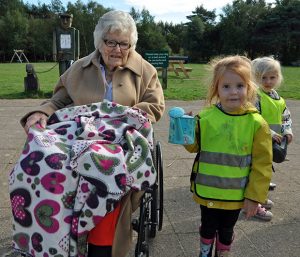 Ranger Carol Dawkins who escorted the Fernhill party, said: “Exploring Avon Heath is like finding treasure with your senses. You can smell the coconut fragrance of the gorse flowers, hear the spring birdsong and in the case of our children and their special visitors, get your hands dirty in the earth, which everyone thoroughly enjoyed.”

Amongst the Fernhill party was Michael Haylock, who was called on to dig some holes for the planting by some of the nursery children.

He said: “It’s a lovely spot out here. I used to live over this way and would go walking on the heath. It’s been a really nice afternoon.” 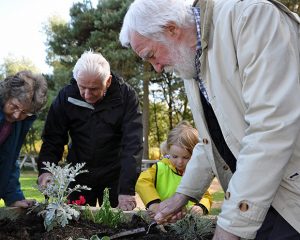 Resident Michael Naylor joined the children in playing ‘music’ on a metal sculpture.

He said: “It’s nice to be around the children. They are very lively and a lot of fun.”

Ann-Marie Knight, a Colten Companion at Fernhill, said: “All the residents were absolutely delighted by the visit.

“The park is very beautiful and prompted several of them to recall walks they have enjoyed in the past and hobbies like birdwatching.

“Being with the little children, who are so full of wonder for the outdoors was also a real treat for everyone and one I think we will be talking about for a long time to come.”