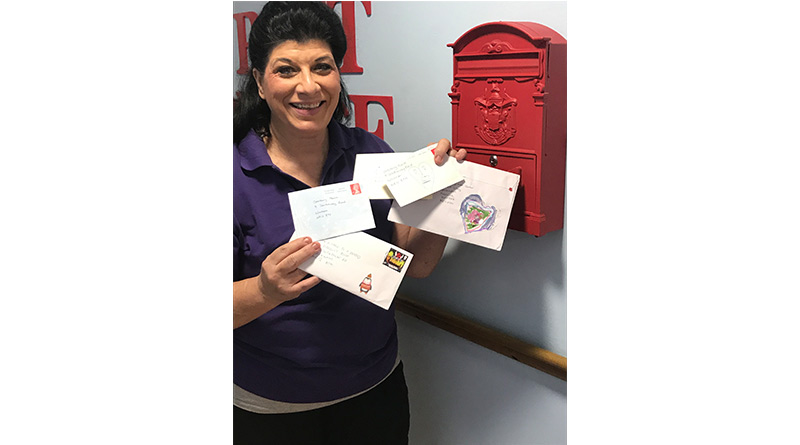 Residents at Overbury House care home in Wroxham have been striking up friendships the old fashioned way, by writing and receiving letters.

Friday 7th February was national ‘Send a Card to a Friend Day’ and to mark the occasion, the team at the home have worked with local charity ‘Friend In Deed’ to spread some happiness throughout the home in the form of handwritten letters and cards.

Friend in Deed is a charity based in Norwich that works to create friendships across the ages.  It has worked with residents at Overbury House for some time, regularly bringing groups of pre-school children into the home to engage with the residents.  Now, the charity has called upon local communities to encourage children to send a letter or card to the home to be enjoyed by a resident.

Over 40 letters have already been received, with local children from Taverham Junior School also getting involved and sending a bagful of letters to the home.

Home Manager Helen Jackson explains, “This project has really brought so much positivity to our home.  We have absolutely loved opening the letters and cards with our residents, which have all been so thoughtfully put together by children and their families or teachers.

“We’ve received wordsearches and puzzles with the letters, as well as pictures and paintings.  Most of our residents live with dementia, so have very individual needs.  We’ve therefore spent time looking at each letter we’ve received and working out who would get the most from what’s inside.  For example, one letter from a little boy told us all about how he looks forward to a trip on the bus at the weekend.  One of our residents used to be a bus driver and has photos of buses in his room, so he was the perfect person to receive this.

“We’ve also found that the letters have been great prompts for our reminiscence work.  The first card we received contained a little girl’s picture so we can then discuss common interests, such as remembering our children when they were young and how quickly they grow up.”

Helen and her team have encouraged writing and communication within the home for some time, launching a pen pal scheme 18 months ago.  The project led to residents forging friendships with school children in Spain.  It is hoped that the national day will lead to some pen pal friendships that can be continued long into the future.

The home would encourage people to continue sending cards and letters for residents.  Each should be addressed to Overbury House, Staitheway Road, Wroxham, NR12 8TH.