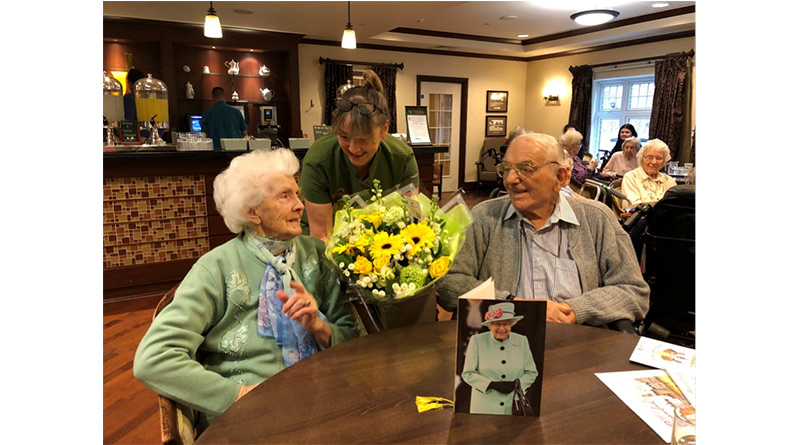 Team members at Sunrise of Bagshot were delighted to help residents Maureen and Keith Christian celebrate their 70th wedding anniversary this week.

Maureen, who was born in County Clare, Ireland, came to England after WW2 to train in a hospital in Nottingham. Her father, who had also been working in England, then got her a job in Surrey working in the Land Army with German prisoners of war. It was here that Maureen met Keith at a dance in Sutton in 1948.

Keith was in the Royal Artillery where he was a trained tank driver and went on to serve in India in the 1st Para Light regiment. He did around 6 jumps during his time in the army and loved to box and play rugby in his down time. Keith says he much preferred playing rugby against the RAF rather than the Army, as it was RAF officers who played and post-game tea was in their mess, which were much nicer than his regiment’s.

The couple were married in 1950 in Walthamstow, East London and rented a flat in Leyton. Maureen and Keith then bought a house in Walthamstow in 1964 before finally moving to Waltham Abbey, Essex in around 1988.

When asked about their tops tips for a long and happy marriage, both Keith and Maureen said “it’s a secret”.

“It was a privilege for the whole team at Sunrise of Bagshot to help Keith and Maureen celebrate their special day. They are an inspiration to us all and it is heart-warming to know that Keith and Maureen have committed so much of their lives to a loving marriage. As we celebrate this beautiful achievement, all of us at Sunrise wish them many more years of happy marriage for the future.”