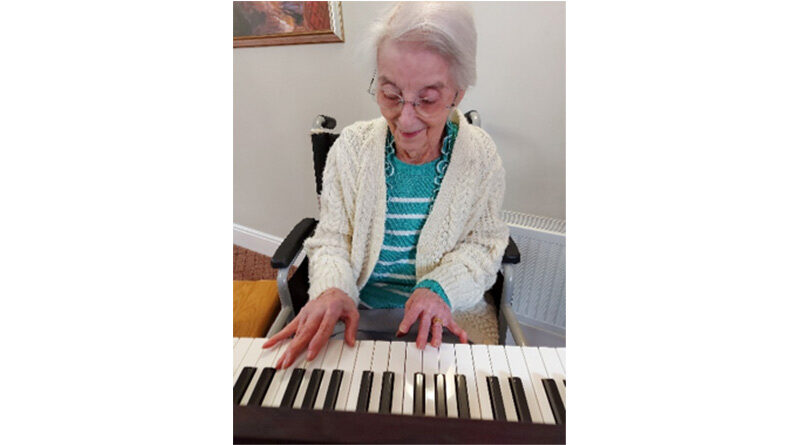 Talented care home residents in Dorset took to the keyboard to show off their musical skills on World Piano Day ( 29 March 2021).

Resident Maureen Smith, who has played the piano since she was just six years old, performed a series of classical favourites in a solo recital.

And she was joined for several duets by Companionship Team Member, pianist and cellist Caroline Pugh.

Maureen, who is from the Dorset village of Sixpenny Handley, had got out of the habit of playing until she moved to Whitecliffe more than a year ago and saw the piano in the lounge.

Maureen said: “I learned by ear when I was six and took lessons as I got older. I always memorised the music by heart and remember being told off by my teacher for not reading as I went. I’ve always played for fun and Whitecliffe has rekindled my interest.”

Proving it is never too late to learn something new, Sylvia said: “We had a piano in our house when I was growing up but no-one knew how to play. I took on the challenge of a New Year’s resolution this year to learn to play Happy Birthday in time for my own birthday celebrations in February.”

Praising each resident, Caroline, a graduate of the Guildhall School of Music and Drama, said: “Playing the piano is a great opportunity to have fun while keeping your hands active and your mind alert. It can be calming and inspirational and it’s a real treat for fellow residents and staff to hear.”

World Piano Day takes place on the 88th day of the year, reflecting the number of keys on a conventional piano.

The annual celebration was founded in 2015 by the German pianist and composer Nils Frahm.