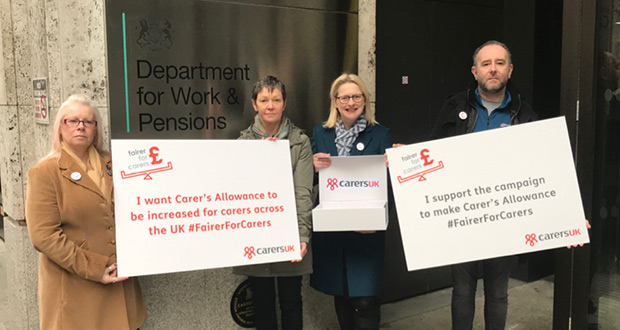 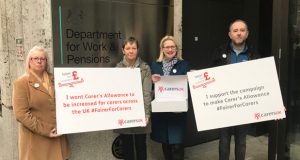 Leading carers’ charity Carers UK has hand-delivered a letter signed by more than 8,200 people to the Work and Pensions Secretary, Rt Hon Amber Rudd MP, calling for fairer financial support for unpaid carers across the UK.

Unpaid carers in England, Wales and Northern Ireland receiving Carer’s Allowance – the main benefit for people caring more than 35 hours a week for family or friends – receive just £64.60 per week to support their living costs, the lowest benefit of its kind.

In Scotland, however, Carer’s Allowance has been increased to the same level as Jobseeker’s Allowance, up by £8.50 per week, bringing the total to £73.10 a week.

The change means that carers living in the UK are receiving different levels of financial support depending on where they live – with their finances tied to a postcode lottery.

It means more than 750,000 unpaid carers in England, Wales and Northern Ireland are £442 a year worse off compared with carers in Scotland2.

Carers UK has been campaigning for better financial support for unpaid carers through its Fairer for Carers campaign. The charity wants to see the increase implemented in the rest of the nations, bringing Carer’s Allowance to the level of Jobseeker’s Allowance throughout the UK, with associated increases to the Carer Premium, Addition and Element* in means-tested benefits, so that all carers in the UK see an increase in the financial support they receive.

“Carer’s Allowance is the lowest benefit of its kind and many unpaid carers who rely on this support face a never-ending struggle to make ends meet.

“We know that 1.2 million carers are living in poverty, with many having to cut back on small things that allow them a life outside of their caring responsibilities – and even forgoing essentials such as food and heating.

“The increase for carers in Scotland is welcome. Now, it’s time the Government made it fairer for carers and raise Carer’s Allowance in the rest of the UK – recognising carers’ enormous contribution to the economy, worth over £132 billion every year3. The Government’s Green Paper on Social Care must have families at its heart – including better financial support for those caring unpaid for loved ones.”

Carers UK Chief Executive, Helen Walker, and carers from England, Wales and Northern Ireland in receipt of Carer’s Allowance made the trip to the Department for Work and Pensions to hand in the letter.

“For me, Carer’s Allowance is some recognition of what I have given up and what I save the Government to look after my disabled daughter. Her disability means that it was extremely difficult for me to go back to work in the NI Civil Service.