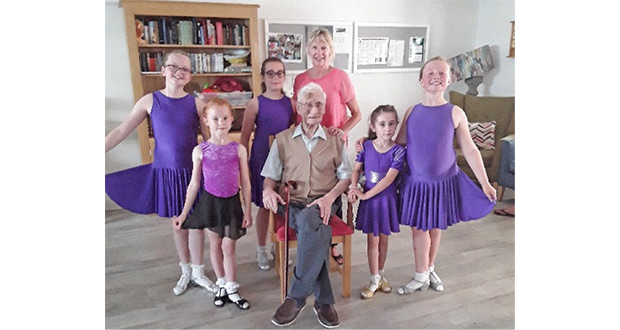 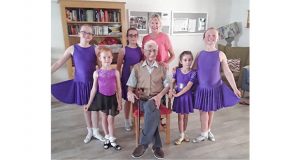 A former gold medal dancer who performed at the iconic Blackpool Tower Ballroom has rekindled some of his moves and steps with help from his Dorset care home.

Jack Richardson, 93, told staff at Colten Care’s dementia care home The Aldbury that he would love to dance again.

Founder and teacher Lynda Toohey brought along a troupe of young dancers and readily accepted Jack’s invitation to take to the floor.

The pair danced a waltz to the tune of Moon River followed by a foxtrot to Getting To Know You.

Lynda said: “He said he wanted to dance with me and as we got into it very gently, you could tell bit by bit that little things were coming back to him.

“It was lovely to see him recalling his old moves and doing the steps again. He was definitely with it.”

Among other dances performed by the students from Dance Majic were tangos, cha chas and a Virginia Reel line dance.

The Aldbury’s Companionship Team Leader Sarah Ingram said: “We had a lovely afternoon watching and dancing with the pupils.

“When Jack started dancing he had a beaming smile on his face. It was an emotional moment for him, his daughter who was there, and all the team.

“Our residents complimented the children on how well they did and said how much they had enjoyed the time spent with them.

“It was lovely to see generations united through the power of dance and also to see Jack’s wish come true.”

Jack, from Middlesex, used to dance in competitions with his wife and recalls winning gold medals at the Blackpool Tower ballroom, the famous venue that each year hosts one of the rounds on BBC’s Strictly Come Dancing.