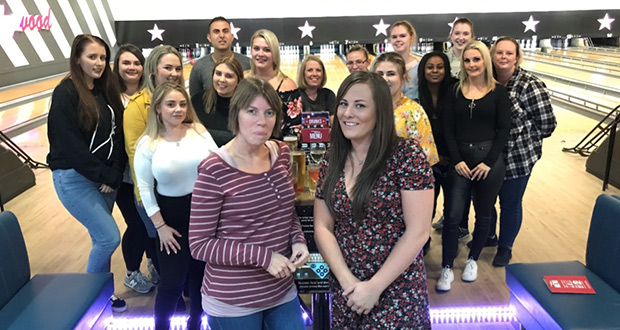 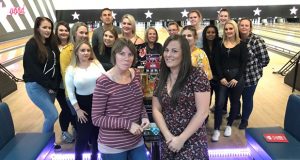 They raised £768 when they went head-to-head at Hollywood Bowl Tolworth on Friday 5th October, 2018.

Children at Toad Hall Nursery, Chessington, have been visiting The Royal Star & Garter Home in Surbiton weekly since April and, as a result, staff decided to raise money for the Charity through the sponsored tenpin bowling match, which featured two teams of nine.

Staff raised £384 from the event through sponsorship, which was then matched by Toad Hall Nursery head office.

Emma Ockenden, Nursery Manager at Toad Hall, Chessington said: “We like to pick a charity yearly and because we come to the Home in Surbiton every Friday it felt right to get involved with the Charity. Our children love going there, and it felt appropriate to be supporting the veterans they enjoy seeing each week.”

Ashlea Sexton, Nursery Manager at Toad Hall, Walton-on-Thames, said: “As a nursery we are looking after the younger generation and its lovely to see how to look after the older generation. The feedback we receive is residents absolutely love their visits. I have been at the Chessington nursery when children have returned from the Home in Surbiton and they have been smiling from ear to ear. They tell us about the people they have met and the conversations they have had and it’s a really lovely experience for them.”

Raquel Pena Aristizabal, Activities and Volunteers Manager at the Home in Surbiton, said: “Residents already benefit incredibly from the children’s weekly visits, holding a fundraising event for them is such a kind gesture, we are very grateful.”

The bowl-off was won by staff from the Chessington branch.

Toad Hall Nursery has 13 nurseries throughout the South East, providing a welcoming, safe and nurturing environment for children aged between three months and school age, to learn and play.

To sponsor the tenpin bowling fundraiser go to www.justgiving.com/fundraising/ashlea-sexton2