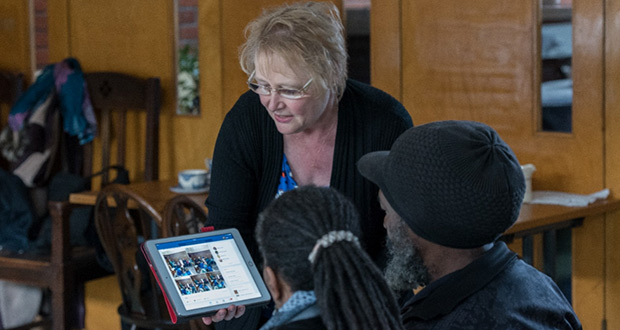 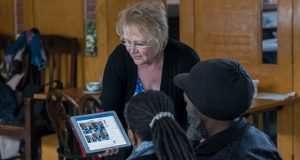 An army of volunteers across Birmingham are working to bring older people out of isolation.

To mark International Day of Older Persons (October 1) volunteers representing Ageing Better in Birmingham have been sharing their stories about tackling the problems of isolation faced by older people.

The National Lottery-funded programme is working to reduce isolation in the city through a grass-roots approach designed to empower and connect individuals, helping to create sustainable change in communities.

It supports volunteers who reach-out to people over 50 who may be suffering loneliness in older age. Through weekly groups the volunteers connect individuals, helping to create a positive change in the lives of those they reach.

Janet Nock, 59, Project Leader of Time to Talk, for the over 50s in Sparkbrook, said: “We’ve had fantastic results integrating people who have dementia into group sessions and educating people about other platforms to communicate such as social media.”

Widower, Stan Simpson, 70, became secretary of the East Birmingham Pensioners Group after attending as a member. The group meet once a month at Ward End Library, Washwood Heath Road, to discuss matters relevant to pensioners over coffee.

Mr Simpson said: “Thanks to funding from Ageing Better in Birmingham we now have 54 members aged between 65 and 86, including two who are wheelchair bound who previously only left home to go to the shop. It’s a fantastic way of getting people together and is a real social event.

“We really are making a difference, inviting guest speakers to help point older people in the right direction on a number of topics, including benefits they may be missing out on.”

So far 2,723 people have benefited from the Ageing Better scheme which was launched in April 2015 and delivered by an Ageing Better Partnership, led by BVSC. It is funded by a £6million, six-year grant from the Big Lottery Fund and is part of the Ageing Better national strategic programme.

He commented: “I get out of the house more and have made friends and have realised I have a passion for horticulture, which has encouraged me to continue my studies. Regular visits from the Ageing Better team have helped me gain confidence with talking to people again.”

Volunteer Nabeela Abdul, has been providing free advice every Monday to older people through a walk-in surgery at the Sherron Gardens sheltered accommodation in Balsall Heath.

Nabeela, who has a background as a community worker and is now training to be a lawyer, said: “It’s about getting people out of the house and giving them the opportunity to socialise.”

She is looking for more volunteers to help her run it as well as donations, including a television for the centre’s communal room.

The programme has developed existing community events, clubs and activities and refocused them on encouraging people to get together to reduce isolation as well as encouraging the formation of new initiatives.

Stephen Raybould, Programme Director, said: “It’s heart-warming to hear all these stories of volunteers who are making a massive difference to the lives of older people often isolated and detached from the world. Social isolation can come about through the life-changing events that can affect everybody.”

As part of the initiative, people of all ages are being encouraged to apply for up to £2,000 through the Ageing Better Fund to start activities, initiatives and events for the collective benefit of isolated older people across the city.