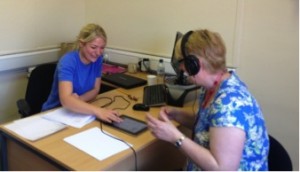 A PhD student has commenced testing for research into the links between hearing loss and cognitive decline, thanks to the support of residents from across Cheshire.

University of Sheffield student Jenna Littlejohn, who is working in conjunction with the Northwest’s leading deafness charity, Deafness Support Network, has now tested 28 subjects to help determine the prevalence of hearing loss and decline in mental abilities as a baseline, to identify possible links between hearing levels and changes in memory, language and attention.

Jenna explains the purpose of the research: “Ageing in general is accompanied by a decline in memory and attention, but existing research has shown that there may be significant links between hearing loss and loss of mental abilities.

“We’re looking to establish this link, ascertain the causes of it and hopefully look into what preventative measures can be taken.”

Approximately one in six people have a hearing loss with two thirds being over the age of 65. One of the most common causes for hearing loss is presbycusis, (age related hearing loss), which is progressive, and tends to affect both ears symmetrically.

“On average it takes at least ten years for people to acknowledge their hearing loss, which typically starts to occur over the age of 40. As the UK’s population gets older, both dementia and hearing loss are becoming more prevalent, which makes this research so important,” adds Gill Reeder, Operations Manager at DSN.

It is estimated that 14.5 million people in the UK will have some form of hearing loss by 2031.

Eric Burt, Head of Health and Safety at Cheshire West and Chester Council, who has taken part in the research said: “This is such an important piece of research and Jenna made the whole experience interesting and enjoyable.

“I would urge others to take part and help us to understand more about the link between hearing loss and dementia. Important research like this is key to enabling advances in science and medicine.”

The testing phase of the research will continue until the end of 2016 and the aim is to test and follow up at least 500 people.

DSN is now calling for volunteers to take part in the research. “The test takes a maximum of an hour and consists of two short questionnaires, one regarding memory, language and attention and the other subjective feelings around hearing loss. Then there will be a brief hearing test and dichotic listening task,” says Jenna.

Testing will take place at Deafness Support Network’s centres, or alternatively sessions can be arranged at a venue of convenience for the test subject.

To find out more about this project or volunteer to take part in the research please call Jenna Littlejohn on 0808 2082440 or email jlittlejohn@dsnonline.co.uk.