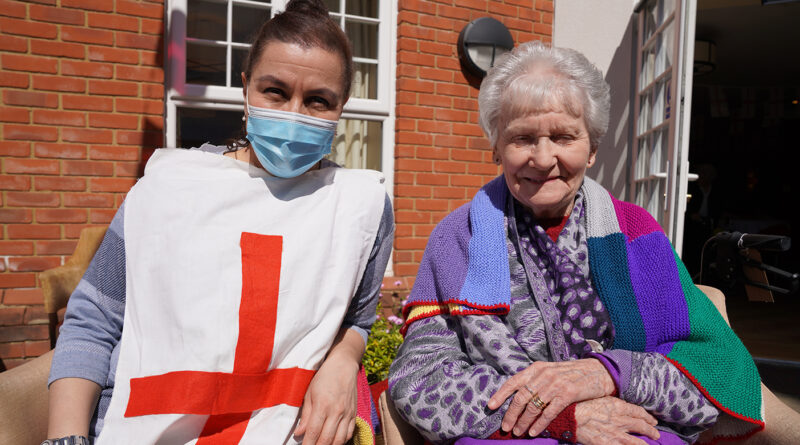 They enjoyed music, crafts, quizzes and delicious food to celebrate the patron saint of England on Friday 23 April.

Royal Star & Garter provides loving, compassionate care to veterans and their partners living with disability or dementia, and celebrates special days in the calendar such as Burns Night, Valentine’s Day, and other UK patron saints days.

The Home in Surbiton was decked with St George’s flag bunting. Residents there were treated to an outdoor St George’s Day concert, given by The ‘Lest We Forget’ Association. They then enjoyed a special British food menu for lunch. Staff also dressed for the day wearing red and white clothing.

In High Wycombe, residents enjoyed a custom-made game of bingo featuring cultural icons such as black cabs, Houses of Parliament, Buckingham Palace and red phone boxes. In the afternoon, they took part in a St George’s Day singalong, which featured songs such as Jerusalem. They also tucked into crisps and other pub snacks, and took part in an English beer-tasting session.

The Solihull Home was also decorated for the special day. Residents living with dementia made St George’s flags from tissue paper. They enjoyed a quiz – which featured rounds on English history, food and drink and monarchs – and snacks including crisps and pickles.

Residents from each of the Homes said they enjoyed their fun-filled day. Lilian, from Solihull, said: “Staff always come up with clever and creative ways to keep us entertained. It was a really nice day.” Amy from Surbiton said: “It was lovely to sit out in the garden in the sun and listen to the music.” And Harold from High Wycombe added: “I really enjoyed the snacks and beer-tasting. It felt like I was back in the pub!”