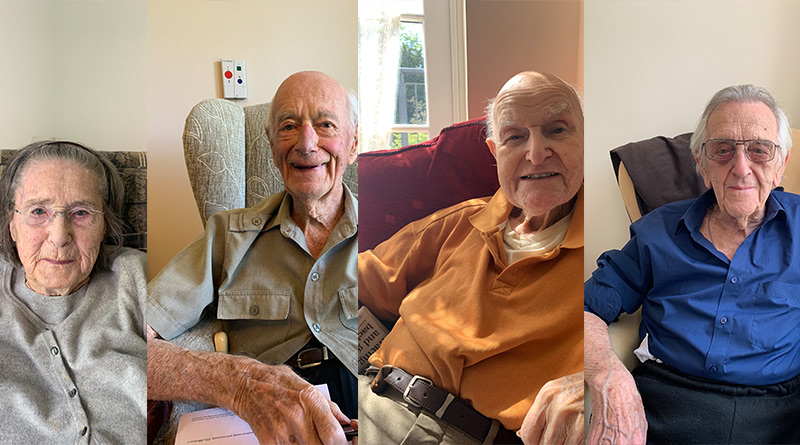 As we celebrate 75 years since victory was secured for Europe in World War 2, veterans at Sunrise of Edgbaston share their stories and experiences of the war.

Joan Jackson, 91, served in the Women’s Royal Naval Service (WRNS) during WW2 for four years. At first, Joan was very home sick but, once she got comfortable in her surroundings, she grew to love her time in the WRNS. Joan says she met some amazing friends during the war and that laughter and fun was never too far away.

Asked what advice Joan can give to anyone joining the Armed Forces, Joan said:

“Any female thinking of joining the forces, please make sure it is what you want to do. Don’t let men dictate or make you believe you should not be there. Women helped during WW2, so you can all definitely leave your mark serving your country. Once you figure out this is for you, enjoy the experience. It will be memories you hold forever and friends for life”.

David Crofts, who is also 91, joined the Royal Navy in 1945 as was on board the HMS Mermaid during the war. David played a vital role in protecting Yugoslavia from USSR aggression, who were intent on invading the country. Thanks to David and the heroic efforts of his fellow servicemen, Yugoslavia was able to fend off the Soviet Union to eventually become an independent country.

After the war, David served in Palestine during the intense violence between the Arab and Jewish populations. He then went to Cyprus and onto the Red Sea before leaving the army in 1948.

David’s simple advice to those looking to join the navy would be to “obey orders and don’t get into trouble”.

George Bowater, 104, started his WW2 journey in the Infantry but was put in the Territorial Army once senior officers discovered he was a trained doctor. Over the course of the War, George was promoted to Lieutenant Colonel and also met his wife who he then had his daughter with.

George then applied to work in the Indian Army. After a particularly gruelling interview with five Army Generals, George was accepted and set off to India with his wife and young daughter. While in India, George spent three years in Burma (now Myanmar) where he helped prevent the Japanese from successfully invading India. He recalls how at one point, he helped stop a Japanese advance 150 miles into India.

After ten years of service, George left the Army to become a GP for the rest of his working career.

Finally, we caught up with Frank Cunniam, 92, who spent three years in the Royal Air force and seven years in the Royal Navy. Although Frank didn’t serve in WW2, he did see numerous conflicts. This includes the Malayan Emergency, which saw British troops fighting against the Malayan National Liberation Army.