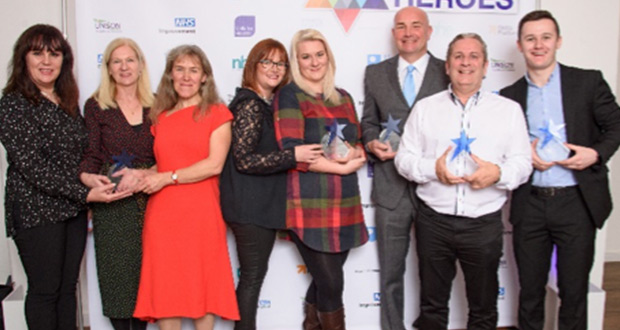 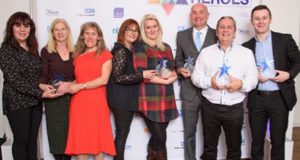 Yesterday afternoon (21 November), the national winners of the second Our Health Heroes Awards were revealed at an exclusive ceremony at London’s OXO Tower, hosted by Skills for Health and headline sponsor, Health Education England.

Paul Tobin, a Porter from St. James Hospital in Leeds and John Clifford, a Physiotherapy Technical Instructor at Neath Port Talbot Hospital in South Wales, won the National Awards for Operational Services and Clinical Support Worker of the Year respectively.

Andrew Gunn, an Apprentice in Marketing at the Edinburgh Clinic, was also awarded the title of Apprentice of the Year after coming top in the public vote.

The Prison Healthcare Team from Lisburn, Northern Ireland, were celebrated as the Integrated Team of the Year.

Silver position went to The Practice Education Team from Royal Bournemouth Hospital and the GP Team from Carlisle won bronze position, both for Workforce Planning Team of the Year.

Paul Tobin, Operational Services Support Worker of the Year, said: “It’s been really lovely to be part of Our Health Heroes and to hear everyone’s stories, but I was so shocked when I heard my name called out. I’ve always said that spending time with patients is what I love to do the most, but it was really nice to be recognised today.”

John Clifford, Clinical Support Worker of the Year, said: “I feel so humbled and honoured to be the national winner, there are so many deserving people here today and I really wasn’t expecting it. My team is lovely and make my job so much easier, so I’d also like to say a big thank you to them.”

Andrew Gunn, Apprentice of the Year, said: “I was so surprised to be announced the winner, I’m the only one coming from a private background so I thought the other apprentices had a better chance. I never thought I’d be at the OXO Tower in London and winning, I’m absolutely delighted to be here flying the flag for Scotland.”

The Our Health Heroes awards returned after their inaugural ceremony last year to once again celebrate the contribution of over a million individuals who make up the healthcare support workforce across the UK. From apprentices to porters to administrative staff, these are the people who keep the cogs of the NHS turning.

John Rogers, Chief Executive at Skills for Health, said: “We created these awards to celebrate the unsung heroes of the healthcare workforce and we are so proud to be putting a spotlight on people like Paul, John and Andrew who truly make a difference.

“We want to offer huge congratulations to all the national winners and finalists, they are truly deserving of their accolades and are a credit to our healthcare service.”

Shadow Secretary of State for Health, Jonathan Ashworth MP paid a short visit to the ceremony to congratulate all the winners. He said: “It gave me great pleasure to meet some of the national and regional winners of the Our Health Heroes Awards who are making a huge difference to the patients that they work with every day. It’s fantastic to see so much commitment and drive to deliver the best patient care possible.”

Laura Roberts, Regional Director – North, Health Education England, said: “We sponsored these Awards to show our commitment to upskilling healthcare workers and we are honoured to be involved in celebrating so many fantastic achievements today. All the finalists and winners should be very proud of themselves.”

For more information on all the finalists and national winners, visit: http://www.skillsforhealth.org.uk/ohh-2017