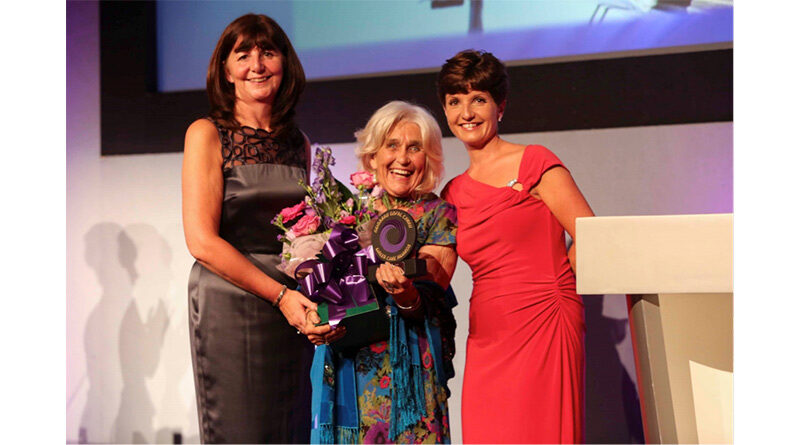 Tributes have been paid to the oldest female skydiver and Welsh charity founder, Dilys Price OBE, who has died at the age of 88.

The retired teacher from Cardiff completed more than 1,000 jumps for charity and in the late 90s, Dilys founded the Touch Trust to help people with autism and severe disabilities.

It grew into a centre for ‘touch therapy’, using music, colour, scent and touch, to help more than 1,000 adults and children every week.

Her efforts for charity were recognised in 2014 when she received the Craig Thomas Lifetime Achievement Award at the Wales Care Awards.

The event at City Hall in Cardiff was organised by Care Forum Wales to acknowledge the dedication and exceptional skill of the unsung heroes and heroines who work in the social care sector.

Mario Kreft MBE, the Chair of Care Forum Wales and the founder of the Wales Care Awards, said: “Dilys was a truly remarkable woman and a fantastic role model to us all. She had an amazing passion for life and was an inspiration to us all.

“As a result of her amazing commitment and unflinching courage, she made an immense contribution over many years and helped improve the quality of life for so many people.

“We were proud that she accepted the richly deserved award Lifetime Achievement Award during a memorable night at City Hall.”

After receiving the Lifetime Achievement Award, Dilys said: “I’m so very proud to have been honoured in this way. These people have the job of looking after others day in day out and to think they see a value in what we do is just wonderful.

“It can be challenging and difficult and sometimes you get frustrated and there are often financial problems, but this makes it all worthwhile.”

Dilys also received a special recognition award at the Pride of Britain Awards in 2017.

At 86, she sold her parachute, but later went on to do a tandem skydive with former Wales rugby star Gareth Thomas in 2018.

And, in the same year, she became a model for the Austrian fashion designer Helmut Lang.

In the campaign’s ‘Women of Wales’ autumn collection, Ms Price modelled alongside an 86-year-old former funeral director and the 77-year-old mother of the late New Romantic singer Steve Strange.

Bev Garside, Chief Executive of Touch Trust, said she was always struck by Ms Prices’s “intelligence, her energy and her warmth”.

“Always with a twinkle in her eye, she grabbed life with both hands until the end,” she said.

“She has had a positive impact on the lives of so many and leaves the world a better place.”