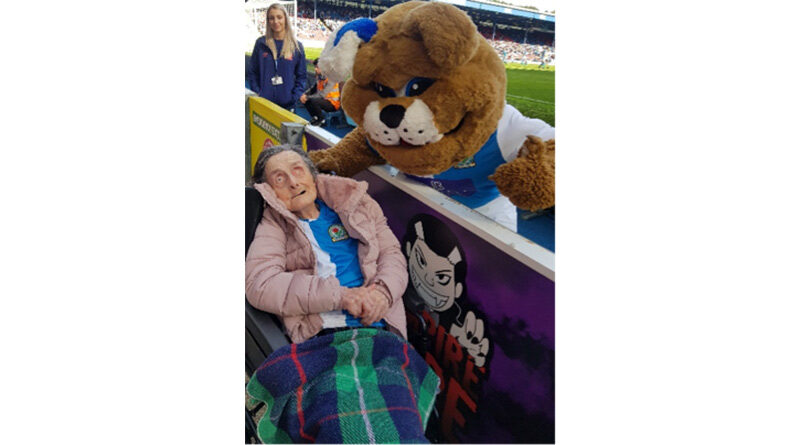 HC-One’s Old Gates care home resident, Doris Houghton, more commonly known as “Dolly” has been a resident at the home since 2010 and everyone at the home loves her. As a special treat, she went to be a VIP for the day and watch Blackburn Rovers.

Prior to the day out, which took place in September 2019, colleagues at the home had contacted Blackburn Rovers to let them know they had a very special guest. Dolly, who is blind, would be escorted by Jessica Logan, her Nursing Assistant, and Joanna Walsh, Registered Nurse.

Jessica commented, “Blackburn Rovers absolutely did a credit to her. Every member of staff was kind and generous to her, she was treated like a VIP for the day, she had her picture taken with the premier trophy and had access to the Director’s lounge, which was described to Dolly, she giggled and said it sounds posh! It was! She was given headphones to listen to BRFC radio.”

Dolly, whose room at Old Gates is full of Blackburn Rovers memorabilia, was taken to the Directors Lounge as well as the club shop where she got a scarf, a t-shirt “pink to make the boys wink”, a Rover’s mascot teddy and a banner. She then had her picture taken with Jack Walker tribute statue and was singing, “There’s only one Jack Walker”!

While enjoying her favourite Southern Comfort and lemonade, Dolly was giggling during the match as she listened to the BRFC radio commentator, waving her fists up, and making all sorts of comments at the Ref. When a player was injured she say “oh dear”.

Dolly sadly passed away on the 8th of September in her sleep at the hospital and she will always be remembered and never forgotten.

Home Manager, Helen Holden, commented, “Ten years colleagues at our home have known Doris, she was funny, witty, loved Lancashire radio, loved Rovers, loved a good gossip, she was such a joy to care for, she loved us all and told us each day. She wasn’t just a resident but a friend to all.”