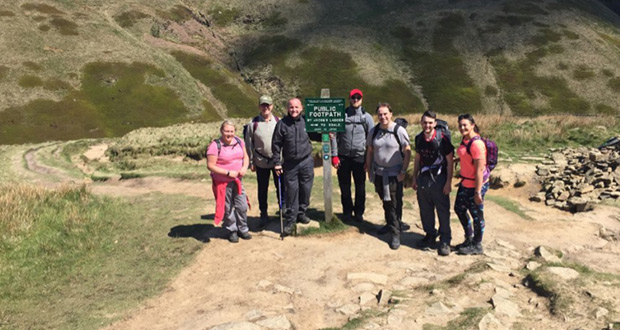 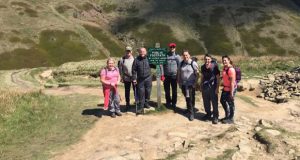 Intrepid fundraisers from Wickes’ Distribution Centre in Northampton are gearing up to take on the gruelling Yorkshire Three Peaks challenge to raise much-needed money for Alzheimer’s Research UK.

Team from Wickes in training for their Three Peaks challenge

The team of 12, which includes one support member, has set themselves a goal of raising £5,000 for the UK’s leading dementia research charity. Thanks to an overwhelming amount of support from colleagues, family and friends, they are on track to hit their impressive target before the event.

Claira Singh, a Northampton-resident, will be one of 11 taking on the 24-mile long walk, which they aim to complete in under 12 hours. Their 5,200ft ascent will include the peaks of Pen-y-ghent, Whernside and Ingleborough. Ahead of the big event on 23 June, the group has been on a trip to the Peak District to train.

The challenge is one of many underway for Alzheimer’s Research UK by colleagues at Wickes, after the home improvement retailer voted for it to become its charity partner. Since the fundraising kicked off last summer, Wickes has raised an incredible amount, reaching over £450,000 for the cause. This will be used to help fund life-changing research into dementia and the diseases that cause it.

Claira with her colleagues in training

Claira, 30, who is at HR Business Partner for Distribution, said:

“This is such a great opportunity to do something aspirational for Alzheimer’s Research UK. So many people know somebody affected by dementia and I’ve seen the impact through friends of mine who have a family member with the condition. It doesn’t just affect the person with the diagnosis, it is incredibly hard for their loved ones too.”

Speaking about the challenge, Claira added:

“I’m really looking forward to it – although I’ve told them that I will not be coming down if there isn’t a bottle of Prosecco waiting for me in the minibus! We’ve been to the Peak District to get some training in before the big day and it was a really fun team-building exercise. We’ve also been blown away by the support of our colleagues, along with family and friends. Thanks to them, we are going to smash our fundraising target.”

“We want to wish the entire team the best of luck for their Yorkshire Three Peaks challenge, we know they are going to do a great job. We are incredibly grateful for their efforts, along with everyone else at Wickes who is fundraising on our behalf. Without the support of partnerships like this one, we would not be able to fund the research which will lead us to a life-changing treatment for people with dementia. There are currently 850,000 people in the UK living with the condition, with 2,269 in Northampton alone. Through the power of research, we know we can defeat dementia.”