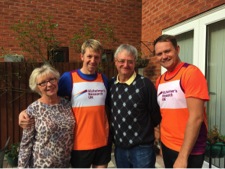 Brothers Ian and Chris Stilgoe are preparing to take on the Great Birmingham Run on Sunday 18 October to boost funds for Alzheimer’s Research UK, the UK’s leading dementia research charity. The brothers, who are both from Tamworth, are supporting the charity in honour of their dad, Kevin, who was diagnosed with Alzheimer’s disease last June, aged 66, and is now cared for by his wife, Paula.

This will be Ian’s first major running event whereas Chris is a seasoned triathlete, and the duo will be running the 13.2-mile race side by side. The Great Birmingham Run takes in many of the city’s famous landmarks including the Bullring shopping centre and Edgbaston Cricket Ground. Alzheimer’s Research UK has charity places available for runners still wanting to take on the Birmingham half marathon with no registration fee to pay. Applicants can sign up at www.alzheimersresearchuk.org and are asked to aim for a minimum fundraising target of £250.

“Dad hadn’t been himself since he retired a few years ago. He was an engineering manager and worked for the same company for 40 years having joined when he was just 16 to complete an apprenticeship. We knew after so many years of work that retirement would be a shock for him and at first his change in behaviour was put down perhaps to depression.

“But about 18 months before Dad’s diagnosis we started to suspect there was something else going on. He was becoming forgetful and was frequently losing his keys or misplacing his wallet. He became less engaged in conversations and would give standard answers to questions or divert them altogether. He also became short-tempered which was completely out of character for him – we understand now this was down to frustration.

“When the diagnosis of Alzheimer’s disease came Dad wouldn’t accept it and still doesn’t. He has deteriorated over the past 12 months and although he can still communicate he cannot hold a conversation and will give only one word answers.

“Chris and I have chosen to support Alzheimer’s Research UK as we want to do what we can to contribute to the power of research, which ultimately will prevent other families in the future having to go through what ours is. Dad used to live life to the full. He had a passion for fishing and football and was the life and soul of the party. It’s very difficult to know this is a disease for which there is no cure and that Dad will never be the same again.”

Zoe Baggott, Regional Fundraising Officer at Alzheimer’s Research UK, said:
“We are very grateful to Ian and Chris for taking on the Great Birmingham Run and wish them the best of luck on the day.

“There are 850,000 people across the UK living with Alzheimer’s disease and related dementia’s today, including nearly 12,000 in Staffordshire. With no treatments available to stop the disease process in its tracks, we urgently need new ways to combat this devastating condition.

“Alzheimer’s Research UK invests in research projects that hold the best hope of finding preventions, treatments and a cure for dementia. Research has the power to defeat dementia and Alzheimer’s Research UK is leading the charge. We rely on public donations and it’s thanks to people like Ian and Chris we can help provide crucial resources for our scientists and fund pioneering research, driving the next breakthrough.”

If you would like to sponsor Ian and Chris visit https://www.justgiving.com/StilgoeBrothers/