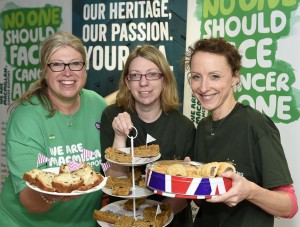 Employees at Greene King’s head office and brewery in Bury St Edmunds have raised more than £600 for their charity partner, Macmillan Cancer Support, by holding a World’s Biggest Coffee Morning.

Home-baked cakes, cookies, savoury muffins and scones were made and donated by employees for the charity event. The highlight was the charity ‘bake off’ with the innovative Old Speckled Hen keg cake which actually served beer, made by Clare Sturman from the cellar service department.

The event was held in support of Greene King’s partnership with Macmillan Cancer Support. The company has raised £1.8m for Macmillan since the partnership began in May 2012, with the Coffee Morning a key piece of fundraising activity. Last year, Greene King pubs, restaurants and hotels raised £125,000 for the Coffee Morning alone, and it is hoped they will exceed that amount this year.

Rooney Anand, Greene King’s chief executive, said: “Our head office employees always get right behind the World’s Biggest Coffee Morning fundraiser, and this year was no exception. Many of them have put a great deal of effort into to baking cakes to sell to colleagues. The ‘bake off’ competition showcased some impressive creations, which were then sold on to raise more money. I’d like to thank everyone involved in helping us to support Macmillan.”

The ‘bake off’ competition entries included a 3D rugby cake and a honey bread made with Old Golden Hen beer.

Rachel Gascoigne, partnership manager at Macmillan Cancer Support, said: “As always, it was great to see the employees from Greene King’s head office really getting behind the World’s Biggest Coffee Morning, our flagship fundraising event. I’d like to say a huge thank you to every single person who baked and entered a cake or made a donation to be a taste tester because you’ve all helped raise money for Macmillan! It’s amazing to see the continued support for our partnership with Greene King, to help us ensure that no one faces cancer alone.”