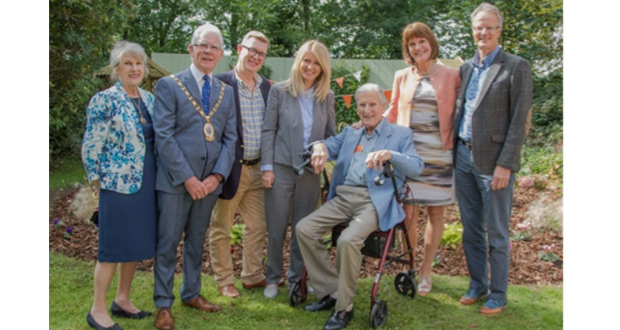 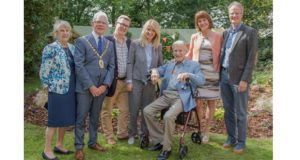 Residents, family and local neighbours joined together at Sunrise of Mobberley, on Hall Lane, for the special opening of its Wellbeing Garden in memory of a former resident, Marjorie Dunkerley.

Geoffrey Dunkerley, Marjorie’s husband, was the Guest of Honour for the day, proudly cutting the ribbon alongside the Mayor to officially mark the commemorative garden open for all to enjoy. On opening the garden, Geoffrey made a heart-warming speech with his family joining in the afternoon’s events.

Geoffrey and Marjorie first met at Manchester Royal Hospital where she was a nurse, and they moved to Sunrise of Mobberley together in 2014. Geoffrey still lives at the community, and continues to enrich the everyday life at Sunrise through his Resident Ambassador role. The beautiful gardens are now dedicated to her, as she was such a lively and personable character.

To celebrate the special day, guests were welcomed with a glass of Champagne, followed by Mobberley Brewhouse beer & Pimms in the rear terrace gardens. Later in the day, the guests were treated to afternoon tea, with sandwiches, scones and cream.

There was also musical entertainment from ‘Sounds Interesting String Quartet’, set amidst the beautiful new gardens.

In the afternoon, there was a yoga session with Karen Dawson from “British wheel of Yoga”, which was sampled under the gazebo. Later on, there was a Wellbeing Demonstration led by Corbyn Kilday from Pulse health, fitness and wellbeing.

The whole team at Sunrise of Mobberley were immensely grateful for the beautiful plants donated by exhibitors from RHS Flower Show Tatton Park 2017 and in particular, Greenbelt Landscapes, who created Mid Cheshire Hospitals Charity ‘Remember Me’ Garden.

“We are absolutely delighted that our Wellbeing Garden, in memory of former resident at Sunrise of Mobberley, Marjorie Dunkerley, is now officially open for all to enjoy. The event was incredible, and we are really grateful to have been joined by Marjorie’s family, the Mayor and Mayoress, our local MP Esther McVey and Councillor McRae, as well as all the friends and families of the community.

“It was lovely to watch Geoffrey and the Mayor cut the ribbon together to open the garden – it is was such a special day that we will all remember with very fond memories for a long time to come.”