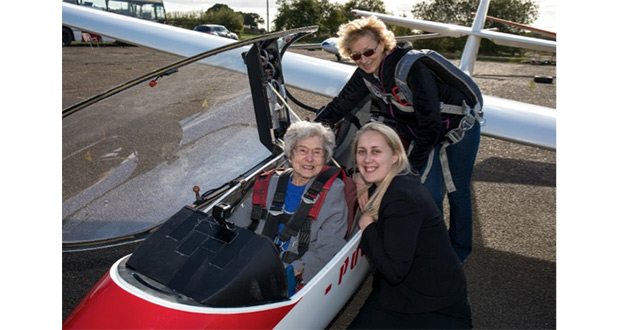 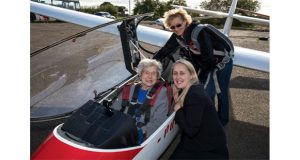 The team at Davers Court care home in Suffolk really did reach for the skies to make the wish of one resident come true recently.

Not content with organising an exhilarating sail in a two-person dinghy or a spin round the park in a rickshaw for other residents, the team members took things up a notch when they fulfilled the wish made by 99-year-old Olwyn Hopkins, who lives at the Care UK home in Bury St Edmunds – they arranged for her to take to the skies.

Born in Wales, Olwyn spent much of her life in Portsmouth before moving to London with her husband David. Olwyn’s first experience of flying in a small aircraft was 81 years ago, when she was just 19 years old and flew from Portsmouth to the Isle of Wight. She didn’t enjoy the experience and hasn’t been on a similar small plane since although she has enjoyed many flights on big passenger planes.   However, as she approaches her 100th birthday Olwyn decided that the time had come to put her first experience of flying behind her and to take a trip in a small aircraft. A few phone calls later and the team at her care home had found a pilot willing to take her up.

With the help of Rattlesden Gliding Club, Olwyn travelled to the airfield for her chance to take to the skies once more with experienced pilot Elizabeth Russell. Leaving from the site of an old WW2 American airbase in rural Suffolk, the 99-year-old was able to take in the views of the county beneath her. The day was made even more memorable when the BBC digital team decided to film the flight and sent along a crew who even put a Go Pro in the cockpit to record Olwyn’s reactions. The resulting film was shown on the BBC website and even mentioned on the BBC’s One Show.

Like most Care UK homes, Davers Court actively encourages residents to submit wishes of memorable things that they would like to do. Regional director Phillip Steyn said: “Olwyn’s desire to take to the skies is just one of range of wishes that we have lined up to fulfil across our homes. We pride ourselves on really getting to know residents and helping them to get the most out of life. People outside the home are often surprised at the adventurous things residents want to get up to but why not? Living in a care home is just another chapter in someone’s life.

As she landed, Olwyn was as calm as a cucumber and all smiles, declaring that she had loved it and wanted to repeat the flight on her 100th birthday next year. She added: “I wanted to show people that you can do anything you want to, no matter how old you are – age has no boundaries!

“It was a wonderful day and I was delighted to be able to get back into an aircraft. I didn’t think I’d get the chance again after all these years, so it was a fantastic surprise. It was a really memorable day – I can’t thank Liz the pilot, Rattlesden Gliding Club and the team at Davers Court enough for organising this experience for me.”