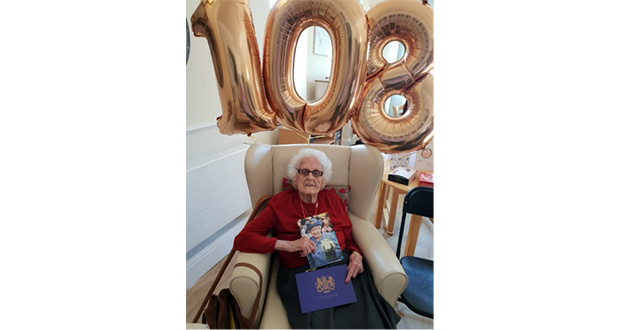 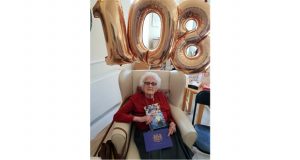 HUDDERSFIELD’S oldest person has celebrated her 108th birthday surrounded by three generations of her family.

Ivy Clegg marked her big day with a fish and chip supper and games of dominoes at Aden Court Care Home, where she has lived for two years.

Her daughter in law, Linda Clegg, explained that Ivy’s secret to a long life must be eating plenty and not going to hospitals.

Linda said: “She would say ‘eat your dinner and avoid hospitals’. She loves her dinner. She always eats lots and always has done – three meals a day.

“She keeps away from hospitals as well. She’s only ever been in to have her cataracts done and that was back when they used to keep you in for that.”

Ivy was born on 9th October 1910 and lived in Almondbury, a village two miles from Huddersfield town centre, for most of her life.

She left school at 14 to work at Sykes and Tunnicliffe rugmakers and then left work after marrying her husband, Clifford, in 1933.

After being widowed over 40 years ago, she moved into a bungalow aged 80. She also cared for her father, Arthur Leonard, who lived to be 100.

She had a son, Peter, who passed away three years ago, aged 74.

At age 100, Ivy was “still going on holiday to Blackpool”, said Linda.

She moved into Aden Court Care Home, on Birkhouse Lane, Moldgreen, at the age of 106. Asked last year, on her 107th birthday, how old she feels, Ivy said: “Not so old.”

Lisa Boyd, home manager at Aden Court Care Home, said: “Ivy is a real character and loved by everyone at Aden Court.

“What an amazing milestone to reach, at 108 years of age, and the staff and her fellow residents were all delighted to wish her a happy birthday.

“When we asked her how she wanted to celebrate, she asked for her favourite fish and chips and a game of dominoes.”