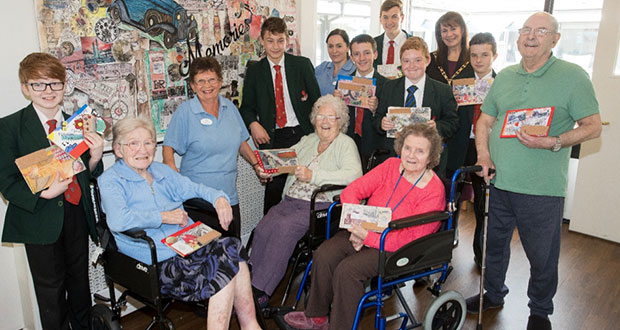 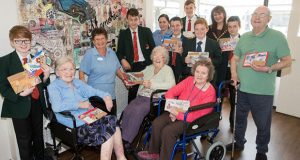 Residents at Turnpike Court care home in Cheshire were deeply moved when they were presented with a mural of their memories created by students from Sandbach School.

Before crafting the mural, students interviewed residents at Turnpike Court to learn more about their lives and memories of the local area. These memories served as inspiration for the mural, which students created during art classes using a range of techniques including paintings, printings and digital cuttings.

The mural features a collection of images based on the residents’ memories, including pastimes, lyrics from old songs and celebrities such as Elvis and Frank Sinatra. It also includes drawings by students inspired by local landmarks, flower displays and architectural details from buildings in Sandbach.

Students revealed the mural to an audience of thrilled residents during a presentation at the home. Residents and students were delighted to be joined by the Mayor of Cheshire East, Olivia Hunter, who was also in attendance for the presentation.

The mural was created as part of Sandbach School’s ‘Achievement Week’, which is held yearly to help children gain a sense of achievement through a variety of activities, trips and standalone projects.

Anne Donohue, an art teacher at Sandbach School, commented on the project: “The students wanted to create a bright, vibrant piece that would be cheerful in the entrance area of Turnpike Court. After hearing the residents’ stories about their time at school and the jobs they previously had, our students gained a newfound respect for members of the local community who they would otherwise not have met. They thoroughly enjoyed the experience and were delighted to hand over the final piece to residents at the home.”

Carla Grocott, Home Services Manager at Turnpike Court, added: “Our residents were delighted to see their memories represented in the memory mural and enjoyed talking to students about their experiences of school and the local area. The mural takes pride of place in our entranceway and is a real talking point for the residents. Everyone at Turnpike Court was deeply moved by the gesture and would like to say a huge thank you to the boys at Sandbach School for their kindness and hard work.”