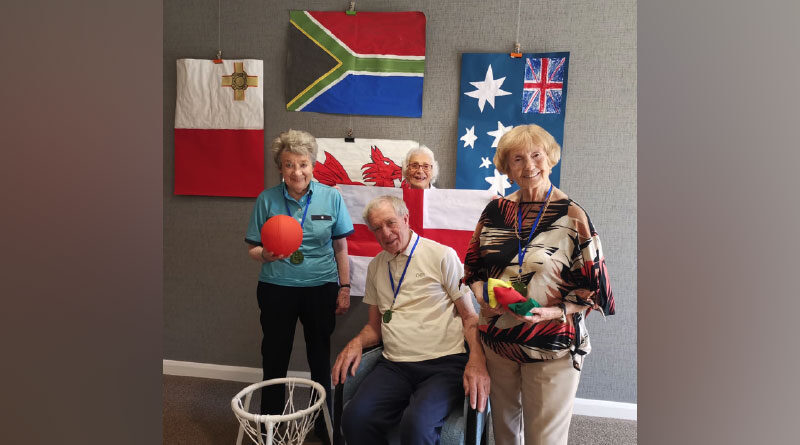 As Birmingham bids farewell to the Commonwealth Games, older people in Newcastle-under-Lyme are continuing its legacy with their own sports day inspired by the Queen’s Baton Relay visit to their home, last month.

Residents at Belong care village on Lower Street have been competing in a number of events including ribbon gymnastics, show jumping and netball, all tailored to their various interests and abilities. The state-of-the-art gym has also been full of action, with the inhouse exercise specialist leading cycling and boxing sessions, culminating in a celebratory medal presentation, with prizes handcrafted by the residents.

Emma Palin, experience coordinator at Belong Newcastle-under-Lyme said:
“Our customers were thrilled to meet the Queen’s Baton a few weeks ago and have loved following the Games on TV. It’s really captured their imagination and with exercise playing a key role in customers’ care planning, we thought we’d put on our own competition to keep fitness fun.”

In the run-up to the Games, Belong played host to the Queen’s Baton Relay which saw Potteries-native, Tracy Paine, tour the site which includes the integrated Belong Heritage Gallery, a local landmark documenting the area’s rich history through a range of interactive reminiscence displays. She was selected to represent the town after being awarded an MBE in this year’s Queen’s Birthday Honours for services to dementia care, having co-founded the not-for-profit organisation and pioneering the ‘village living’ model approach to care.

Last week, Belong also supported customer and avid cricket fan, Francis Baylis, to watch England Women beat New Zealand Women in a group match at Edgbaston Stadium, before losing out to them in the medal rounds.

Emma Palin continues:
“Birmingham 2022 has been called ‘The Games for Everyone’ and that really matches our ethos of helping our customers to live fulfilling and active lives. It’s a privilege for us to be able to support customers like Francis to do the things they want to – there’s always a way!”