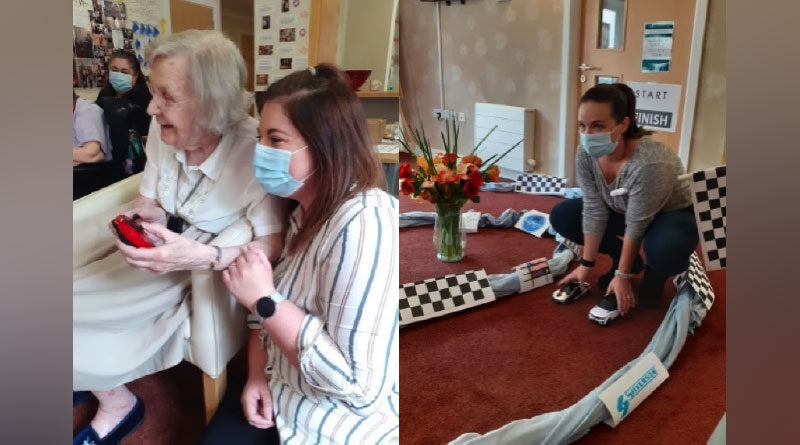 In honour of the 2022 Grand Prix and inspired by the history of a resident within the home, Activity Organisers of Chesham Leys, nursing care home of The Fremantle Trust, encouraged residents to race-to-win in a remote controlled circuit race.

Presented with a circuit in the main foyer of the home, residents lined up to have their turn racing the remote control cars. With help from Activity Organisers, Lisamarie Spain and Rebecca Watkins, each person used great focus to get their car over the finish line to win the coveted first place prize, a bottle of bubbly Bucks Fizz.

After a few races, flag waving and a lot of laughs, the second and third place trophies were given out to Paul Rasinsky and Hendrika Lang, with the first place trophy and Bucks Fizz bottle presented to Jean Porter.

On preparing for the event, Lisamarie commented:
“We unintentionally have quite a few women in our care home, so we wanted to put together something that our gentlemen can really get involved in. Our resident John Wickham was a big inspiration for this as he has such a great history in the racing world.”

John Wickham began his racing career in 1972 assisting the British Automobile Racing Club in organising race meetings. By 1978, John was asked to run the March Formula 2 team which resulted in great success. Later in life, he became a Formula 1 director, a manager of Audi Sport UK and oversaw Bentley Le Mans.

After the event had concluded, the residents were still keen to keep racing; as Paul Rasinksky described: “We have a good selection of things to do and this was different, I enjoyed it.”