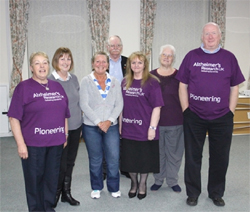 A group of determined fundraisers from Spennymoor, known as Brighter Skies, have raised £28,000 during the last four years, to boost funds for Alzheimer’s Research UK. The group of seven friends work tirelessly organising dances, race nights, weekly bingo sessions and much more to raise money for the UK’s leading dementia research charity. Their next event is a special party night on Saturday 14 June, with live music, dancing and pie and chips for supper, at the Tudhoe Victory Club in Spennymoor.

“All our fundraising at Brighter Skies is teamwork and we love it! The seven of us got to know one another as a result of relatives and friends being affected by Alzheimer’s disease and other forms of dementia. We wanted to do something positive to help others going through the same and decided to set-up Brighter Skies to raise money. All the funds we raise go to our chosen charity, Alzheimer’s Research UK, which is working hard to find the dementia treatments so desperately needed.

“My mum Lily died with vascular dementia in 2012, she was 85. She managed to live at home independently at first, with me popping round to help. But she deteriorated very quickly and soon needed professional care.

“During that stressful time, my father-in-law Joe was also diagnosed with dementia. My husband [Barry] used to get calls from the local building society saying ‘your dad’s here again, we’ve put him back on the bus’. But no sooner had he got home he’d set off again to draw out some more money. On one occasion he left the tap running upstairs in the bathroom. Water flowed all down the stairs and was an inch deep in the hall and kitchen. He used to call us through the night not realising the time. He passed away two years before Mum.”

“At Brighter Skies we all understand the huge impact dementia has on individuals, families and a whole wider network of people. We meet once a month to discuss plans for our fundraising events and would welcome new members if there’s anyone out there who would like to join us. We are very proud of our ongoing fundraising for Alzheimer’s Research UK. But we couldn’t achieve it without the fantastic support of the local community and businesses – everyone is so generous.”

“Over the past four years the team at Brighter Skies have put a huge amount of time, effort and enthusiasm into raising money for our vital research. The resulting £28,000 is tremendous – we really can’t thank them enough. This is enough to fund an incredible 1,400 hours of world-class research, bringing us closer to finding ways to diagnose, prevent treat and cure Alzheimer’s disease and other forms of dementia.

“There are hundreds of thousands of people across the UK living with dementia today, including over 6,000 people in County Durham. Dementia poses one of the greatest threats to public health now and in the future yet funding for research still lags far behind other serious diseases. We rely on our wonderful supporters like the team at Brighter Skies to fund our vital research.”

Brighter Skies’ next fundraising event for Alzheimer’s Research UK is a special party night on Saturday 14 June, with live music, dancing, raffle prizes and pie and chips for supper. Anyone wishing to dance the night away to rock and pop music, played by The Agenda, should head to the Tudhoe Victory Club in Spennymoor. Doors open at 7.00pm for an 8.00pm start. Tickets are £10 each and are available in advance by calling 0333 666 3366.