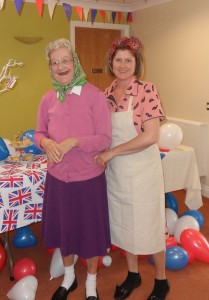 Residents turned the clock back 70 years to mark the first anniversary of the opening of a state-of-the-art £7 million care home in Shropshire.

Carers and residents at New Fairholme, in Oswestry, got into the wartime spirit for a 1940s themed street party at the 88-bed home which first welcomed new occupants in April last year.

New Fairholme, the latest development from Shropshire’s largest independent care provider, Coverage Care, was designed to offer a real choice of hotel services and the full continuum of care for residents.

Both wings of the home, which provides residential with nursing care facilities, were decorated with bunting and carers and service users dressed up in vintage wartime attire for the event.

“Everyone got into the party mood and the staff were wonderful. They made bunting to string up and dressed in wonderful 1940s costumes from land girls to pinnies, rollers and hair nets. There was music from the 1940s and we had Union Jack flags on the tables.

Staff brought in their own china tea sets and even cake stands. Everyone was brilliant and the residents really appreciated it.”

The home, on Shrewsbury Road, has a specially designed Reminiscence Room, complete with a mannequin in 1940s dress, wartime newspapers and Bakelite radio.

It was officially opened by North Shropshire MP Owen Paterson who said the home was “beyond the wildest dreams” of the community who had supported the development and called for further facilities for older people in the Oswestry area.

“One year on from opening New Fairholme, we are delighted to see it become so much a part of Oswestry – we even have a hair salon at the home which welcomes members of the community as well as our service users.

Our new home inherited the family atmosphere of its predecessor in the town, Fairholme, on Morda Road, while bringing the benefits of a wider range of services offered to more people.”