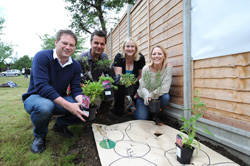 TV gardener and plantsman Antony Henn has joined forces with a community nursery that helps train vulnerable adults to create the longest-ever Gardenonaroll border in just an hour for a local nursing home to raise funds and awareness for dementia charity Alzheimer’s Society.

Landscape designer Antony, who has appeared on the BBC show Gardeners’ World and is behind the Gardenonaroll concept, was joined by volunteers from Digswell Nurseries in Welwyn Garden City, Hertfordshire, and Grant Shapps, MP for Welwyn Hatfield, to create a beautiful 60ft-long, professionally-designed border for nearby St Andrew’s Care Home using the longest Gardenonaroll ever planted.

Antony, whose client list includes Sir Paul McCartney, has based his company at community horticultural centre Digswell Nurseries, which grows many of the plants used in the Gardenonaroll kits. The nursery, which is part of the Saint John of God Hospitaller Services, provides a supportive work environment and training opportunities for vulnerable people in the community, as well as providing work experience placements for students and people who have been unemployed for an extended period.

As well as creating a pleasant and peaceful oasis where care home residents can relax, the planting of the 60ft garden border was part of the nursery’s May Fair, which raised money and awareness for dementia charity Alzheimer’s Society.

Created to enable even the most inexperienced gardeners to create beautiful and professionally designed borders, Gardenonaroll is a revolutionary system which makes DIY gardening easy by using an innovative biodegradable paper template to instruct the gardener where and how to position the plants.

Antony, who came up with the Gardenonaroll concept after working on a primary school project where he drew on a strip of wallpaper to help make it accessible to the young pupils, said he hoped the garden would give the care home residents a new outside space to enjoy.

He said: “We are a company that believes very strongly in giving back to the community. We are based at Digswell Nurseries, which is a community project that helps to train and support vulnerable adults, students and people who have been unemployed for long periods. As a company, we’ve made a conscious effort to support the nursery wherever possible and we source many of our plants from there. This charity fair was the perfect opportunity to help a good cause right here in Welwyn Garden City, both by raising money for a good cause and making practical contribution to an organisation which helps dozens of older people in our community.”

MP Grant Shapps said: “Gardenonaroll is a great local initiative and I’m really pleased that today has been such a huge success not only in raising money but also awareness for such a worthy cause as Alzheimer’s Society. I’m sure the residents of St Andrew’s Care Home are delighted with their new garden and I commend Antony and his team for being such assets to our local community.”

Marcia Tonkin, Manager at St Andrew’s Care Home, said: “We are thrilled with our new garden and are immensely grateful to Antony, Garden on a Roll and Digswell. The residents think the new outside space is a really lovely addition to the home. I am sure they will enjoy it for years to come. Antony has promised to give us maintenance advice so it stays lovely long-term!

“It also means a lot that they have chosen to raise funds for Alzheimer’s Society. Dementia is a dreadful illness, which can be extremely heartbreaking for sufferers and their families. Any help to raise funds and awareness to help people suffering from dementia is a very worthy project and we are grateful for the interest the organisers have shown in a cause so close to many of our residents’ hearts.”

Sarah Wilson, from Digswell Nurseries, said: “People had a really fun day helping Antony plant this 60ft long garden and it’s was an even better feeling knowing that it will be used and make a difference to some of the most vulnerable people in our community. We had a great turnout at the event today and have raised lots of money for Digswell and the Alzheimer’s Society.”

The event also saw the Gardenonaroll team demonstrating how easy the planting system is, with live demos at their newly completed demonstration borders, where members of the public can come and see the various border styles growing and developing throughout the summer.