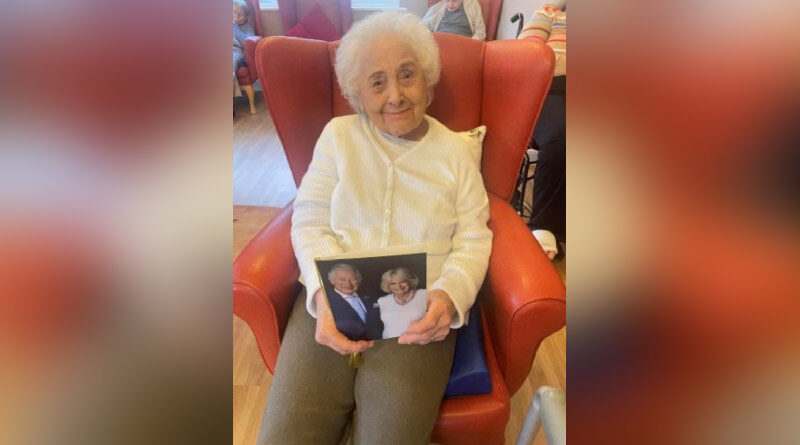 Mary Capaldi, from Orchard Care Homes’ Ashlea Mews, South Shields, celebrated her 100th birthday last week (3rd January), with a special delivery from King Charles III and a vintage themed party for her friends and staff at the home.

Royal anniversary cards are sent to those celebrating their 100th and 105th birthday and every year thereafter. The delivery of these messages is arranged by the Anniversaries Office at Buckingham Palace, continuing a tradition which goes back to 1917.

Mary is amongst only a small group of centenarians who will receive a card from King Charles III after the passing of Queen Elizabeth II in September 2022, but before his official Coronation on Saturday 6 May 2023.

Staff at Ashlea Mews organised a spectacular party for Mary to celebrate her triple-digit birthday where everyone enjoyed a delicious cake and a vintage performance from local singer, Christine Rosemand. The highlight of the birthday celebrations was receiving a very special card signed by King Charles III and Queen Consort, Camilla. She commented: “Well this is lovely. I’ve had a happy life. I think the secret to looking young is that my little bit of make-up goes a long way!”

Orchard’s Ashlea Mews, provides specialist and dementia residential care along with short-term respite care and has been home to Mary since October 2022.

Vicki Yeoman, Home Manager at Orchard’s Ashlea Mews, said,
“It was wonderful to celebrate Mary’s special day with her. All the staff and people at Ashlea Mews had a fantastic time and joined her in singing along to songs from her era, which brought back special memories for all. Seeing her face when she opened the King’s card was wonderful – she had such a big smile on her face!”

In her early life, Mary attended St Bede’s school, South Shields and worked in an ice-cream parlour until meeting her husband, who was also in the ice-cream business. After marrying, the couple moved to Whitley Bay where they ran the family business (pictured above), before returning to South Shields when their son was born. Later, Mary was a familiar face working at their family’s Espresso Bar, Staiano’s, Frederick Street, South Shields, which was there for many years. Through marriage, Mary is related to former Doctor Who star, Peter Capaldi, who was her husband’s second cousin.

A video of Mary receiving her card from King Charles III is available on facebook.