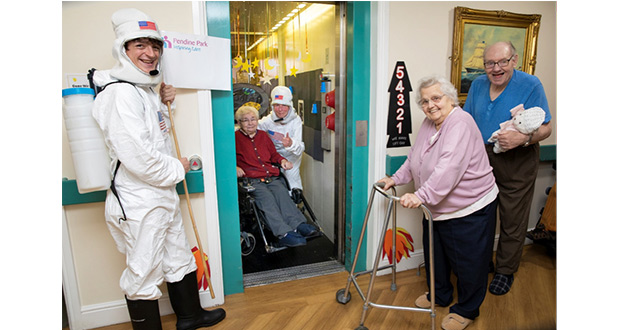 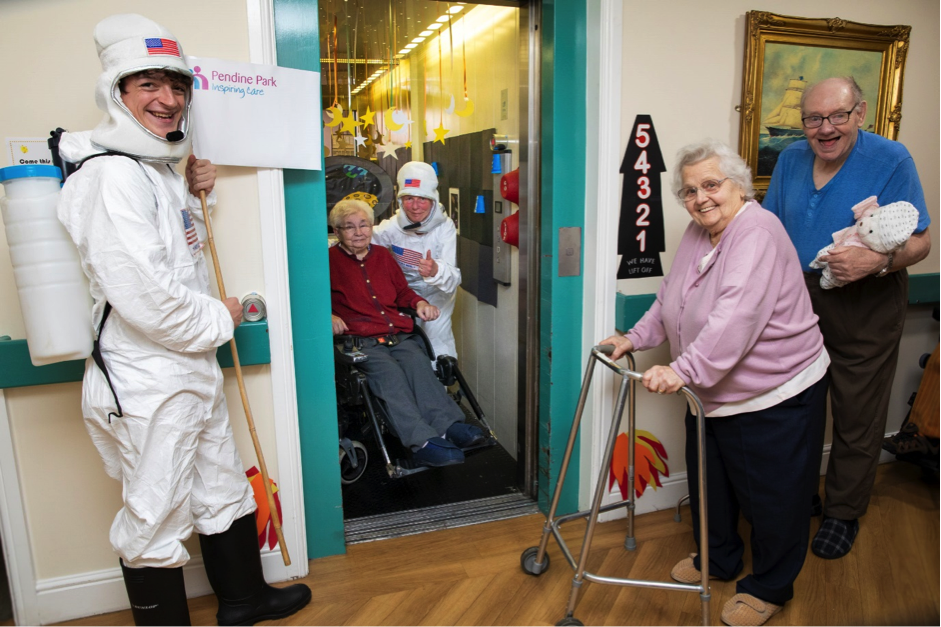 Care home residents took a giant leap with a madcap celebration of the 50th anniversary of the moon landing – by transforming their lift into Apollo 11’s lunar module, Eagle.

The wacky out of this world experience at Pendine Park’s Highfield House Care Home in Wrexham was accompanied by appropriate music like Frank Sinatra singing Fly me to the Moon and Walking on the Moon by the Police.

Once they reached the lunar surface aka the first floor, they planted a flag in a decorated sick bowl which was doubling up as a crater…but this time it was a Pendine Park banner rather than the Stars and Stripes taking pride of place.

The idea for the special event was the brainchild of Pendine Park’s lead enrichment and activities co-ordinator Christine Lewis who thought up the madcap plan while lying in a hospital bed.

She and her colleague, James Wallice, even dressed up in space suits to mark the landmark anniversary of the momentous moon landing when Neil Armstrong and Buzz Aldrin became the first humans to walk on the powdery surface.

Resident Glenys Cross, 85, was one of the first to brave the moon-bound capsule and said she really enjoyed the event.

“Christine is great and is always thinking up new things. It’s always fun and something different.”

Glenys, who has a son, a daughter and one granddaughter who visit her most days, added: “Fifty years ago I was working in school meals in Wrexham. My husband Gerald, who passed away 30 odd years ago, was still alive then too.

“Today brought back some memories but most of all it’s been good fun. I really enjoyed it.”

He said: “It was brilliant. I was only a lad really when the moon landings happened but I do remember it vividly.

“We have had a brilliant day and I enjoyed making the sounds of rockets and astronauts talking on the radio.”