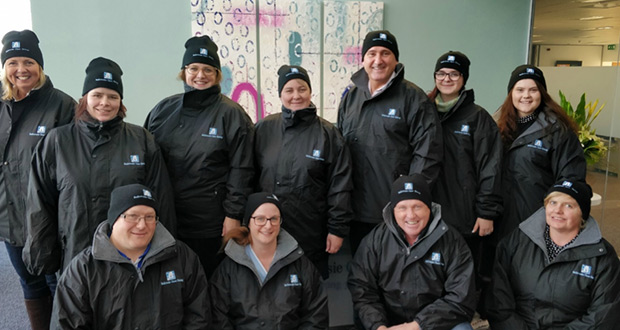 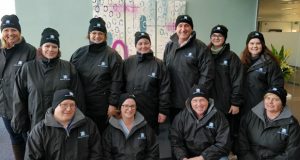 Balhousie Care Group braved sub-zero temperatures and sleeping bags to raise almost £16,000 for charity last weekend, as participants of Sleep in the Park 2017.

The group of 20 staff, from Balhousie care homes across Scotland and the company’s head office in Perth, joined 9.000 celebrities, politicians and other business leaders as they bunked down in Princes Street Gardens to raise awareness of homelessness in aid of Social Bite.

Their contribution – which stands at £15,895 and counting – puts Balhousie Care Group in the event’s Top 10 corporate fundraisers. A highlight for the staff was meeting Sir Bob Geldof, one of a host of stars who took part. But as the temperatures dipped, the “brutal reality” of the event sank in, said participant Yvonne Manson.

“There are no words to describe what it was like to sleep out in the cold. It was a brutal reality but I found myself reflecting on how it was one night for us and that for many this is a daily reality. The experience is something I will never forget,” said Yvonne.

Taking part in Sleep in the Park has strengthened Balhousie’s resolve to highlight social issues such as homelessness and loneliness among its employees, residents and local communities, said Balhousie Care Group CEO Steve White, who took part along with chairman Tony Banks.

This Christmas Day, Balhousie’s 25 care homes across the north east of Scotland will work with local authorities to  open their doors to people who may want to join in their festivities.

Steve, who shares his experiences in a blog, ‘9000 people, 9000 reasons: the reality of Sleep in the Park’, said: “With 25 care homes in 25 local communities, we are in a perfect position to highlight social causes such as homelessness. As a business we’ve always been community collaborators and supporters of charity, but last Saturday’s experience at Sleep in the Park made us even more determined to do so.

“Last Saturday was a wake-up call in so many ways. After a freezing night, Tony and I resolved to up Balhousie’s game and draw attention to basic human issues. We see it as our duty, not only as successful business people but as human beings.”

Social Bite, which addresses homelessness through its cafes, restaurants and free food distribution in Scotland, hopes to raise £4m through the event. Among those who took part in the Sleep in the Park event were Bob Geldof, John Cleese, Liam Gallagher, Deacon Blue and Amy Macdonald.

Balhousie is still taking donations. To support go to: http://uk.virginmoneygiving.com/team/balhousie-care-group