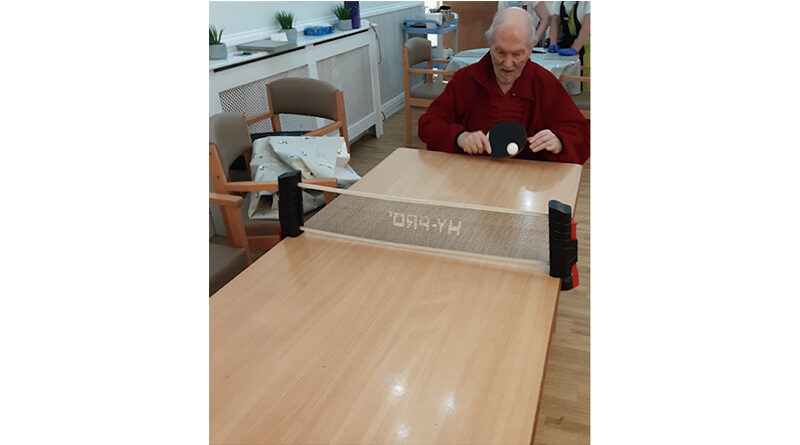 With the Olympic Games well underway, a Sittingbourne care home has served up the inspiring story of one of its residents who has ignited a table tennis frenzy throughout the home – using the sport to gift physical and mental well-being to fellow residents.

Table tennis guru and former coach, Alan Woolven, 90, who resides at Woodstock Residential Care Home, in Kent, has been using his pearls of sporting wisdom to inspire others to get into the Olympic spirit.

Alan, whose sporting excursions have taken him across the globe to destinations such as China and Los Angeles, has seen his love for the sport reignited and shared throughout the care home after inspiring several residents to keenly follow one of the most popular and iconic sporting events at the Olympic Games.

With over 70 years of experience mastering his craft, table tennis represents one of Alan’s greatest passions and has enabled him to share a special bond with his daughter, whom he has watched avidly compete in tournaments up-and-down the country.

He has also introduced countless young children into the sport, with his contributions in table tennis even acknowledged by Table Tennis England, formerly the English Table Tennis Association, where he was awarded several coaching certificates.

Now residing at the Sittingbourne care home, Alan is still able to put his intricate array of experience to good use – sharing expert tips and tricks with fellow residents, as well as identifying their strengths and weaknesses. The excitement of the 28th Summer Games has reignited his life-long passion for the sport and galvanised fellow residents at Woodstock.

Alan said: “Table tennis has been such a huge part of my life for the past 70 years and it’s been so refreshing to see others take an interest in something that you love.  So, with the Summer Games well under way, I thought it would be nice to get everyone in the Olympic spirit.

“I’ve enjoyed watching the likes of Paul Drinkhall and Liam Pitchford progress through the opening rounds, though I’ve also been following China’s Zhendong Fan (World No. 1) with keen interest. He is certainly the one to beat in this summer’s competition.”

Alan, who opened up his own sporting shop in Royal Tunbridge Wells after retiring from table tennis, had many ‘ace’ tips for his fellow residents: “Practicing as much as possible is key, while concentrating on your serve and receive is just as important if you want to build up your game.

“However, what matters most is getting enjoyment out of it and engaging with another mind, gaining a unique perspective into an opponent’s strengths and weaknesses. I like to think I’ve converted a few residents into sharing my love for the sport.”